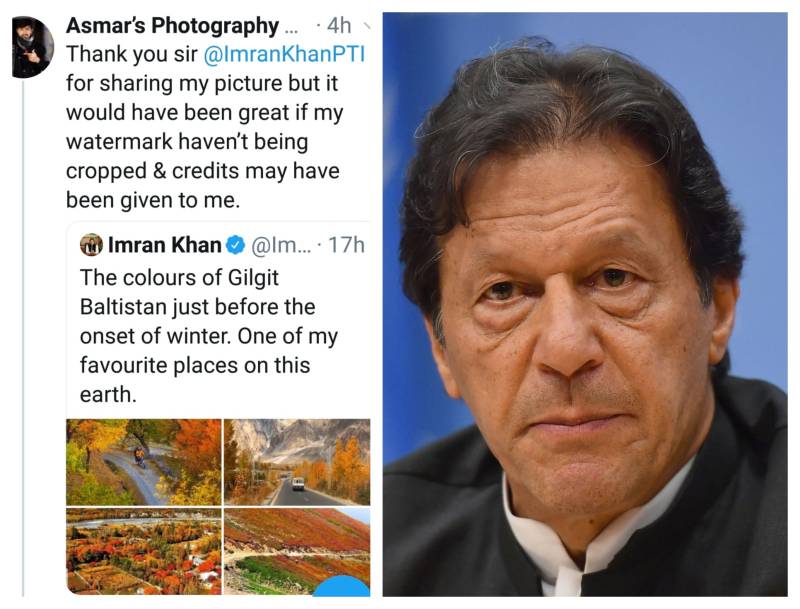 ISLAMABAD – Prime Minister Imran Khan is being roasted by social media users for sharing photos of Gilgit-Baltistan on his official Twitter account without giving credit to the photographer.

The Pakistani premier portrayed the picturesque Gilgit-Baltistan in a tweet on Sunday, and captioned it, 'The colours of Gilgit Baltistan just before the onset of winter. One of my favourite places on this earth.”

The colours of Gilgit Baltistan just before the onset of winter. One of my favourite places on this earth. pic.twitter.com/qdhGqkZ2Fx

Soon after, Khan's tweet got a number of retweets lined up. Also, a sarcastic response emerged from the photographer, who stated his picture had not been credited.

Thank you sir @ImranKhanPTI for sharing my picture but it would have been great if my watermark haven’t being cropped & credits may have been given to me. https://t.co/HaeXsVQPbP

Others are even coaxing the photographer to report the post and sue the premier for “stealing intellectual property”.

This is theft and unacceptable. In a civilised country you could have sued the honourable PM

Many found it shocking how shamelessly these supporters of Imran Khan defending plagiarism, an act of IPR law violation

Its shocking how shamelessly these supporters of Imran Khan defending plagiarism, an act of IPR law violation.

To apologise would be the honorable thing to do by the PM.@PakPMO @CustomsIpre

That's a violation of intellectual copyright laws. By the Office of the Prime Minister. Great example ????

Some PTI supporters followers also pointed out that PM Imran never claimed the pictures were his own and the whole issue could have been an oversight by the PM's social media team.

Lol he just shared he didn't claimed these pics as his own.

The Prime Minister Office is yet to respond to the photographer's objection.

Imran Khan has just shared an old photo of him on Instagram, making his fans and supporters go gaga over him on the ...