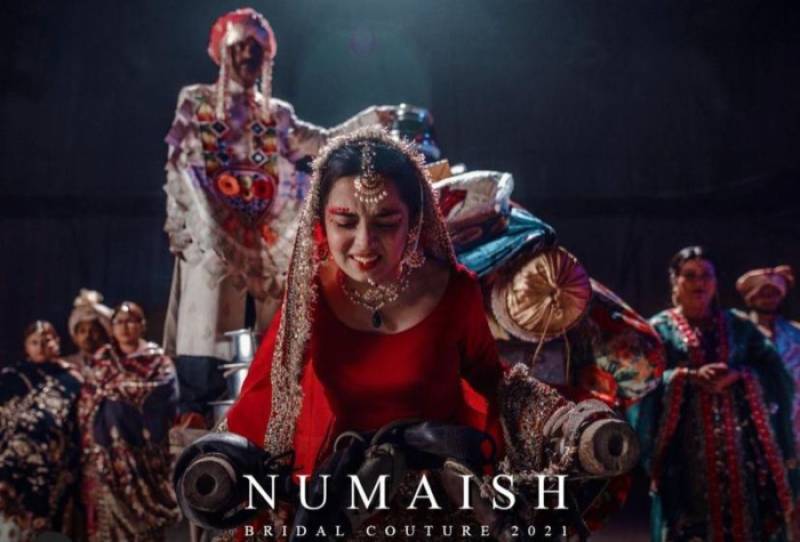 A couturier to the stars, Ali Xeeshan has wooed everyone as he puts forward a fashion campaign against dowry in collaboration with the United Nations Women Pakistan.

Showcasing his latest collection at the 'Pantene HUM Bridal Couture Week 2021,' Numaish highlights the bitter reality of the bizarre matrimonial tradition - dowry, in the most artistic way possible.

Making a bold yet socially responsible statement through his craft regarding the deep-rooted dilemma surrounding dowry, Xeeshan presented a young girl who graced the ramp laden with heavy bridal attire, makeup and jewellery; pulling a cart full of "goodies" down a runway as a showstopper.

Xeeshan has been teasing the collection on social media for days by posting behind the scenes' pictures. In his video, the caption read:

"Shedding light on the epochal and alarming issue of families fretting over saving money for their daughters’ dowry (Jahez) instead of their education that is far more important. It's time to put a stop to this overburdening tradition!"

The collaboration is part of UN Women's 'Jahez Khori Band Karo' campaign, which calls on people to stop asking for and giving dowry.

🚫#StopDowryMongering
Together we have the power to make this evil stop.
NUMAISH - A pledge against dowry by @ALIXEESHAN#NumaishNaLagao #JahezkhoriBandKaro pic.twitter.com/xmmrR2R3qM

A pledge against the old-age tradition of dowry and an effort to educate today’s youth to say no to dowry, the visually stunning fashion film has been quite creatively directed by Abdullah Haris.

Jahez (dowry) is a tradition that is being passed down from one generation to the next in South Asia.

At the Grand Finale, 2016, Ali Xeeshan will be showcasing his latest collection, and his latest idea to the world that ...