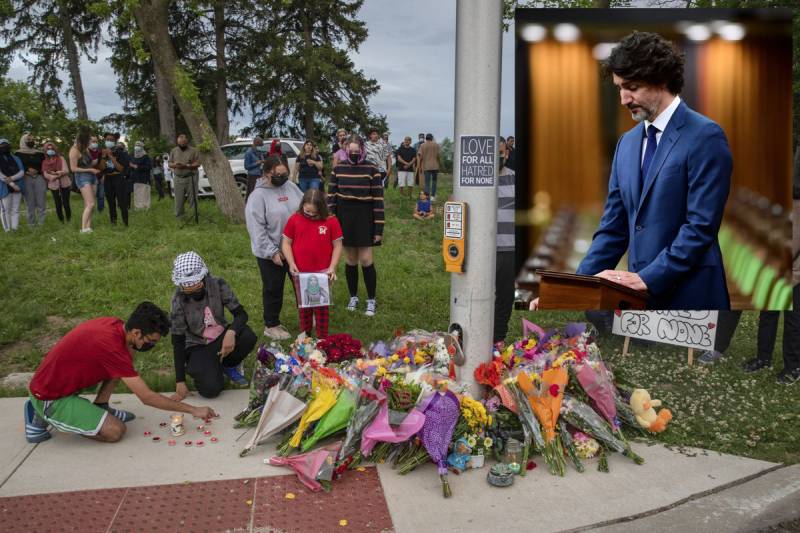 OTTAWA – Canadian Prime Minister Justin Trudeau Tuesday denounced the killing of four members of a Muslim family in Canada's Ontario and labeled it as a ‘terrorist attack’.

The liberal party leader while speaking in the House of Commons condemned the brutal, cowardly and brazen attack which left four Pakistani origin people dead while one minor got seriously injured.

‘This was no accident but a terrorist attack, motivated by hatred, in the heart of one of our communities’, he said. Adding that, ‘Islamophobia is real, Racism is real. You should not have to face that hate in your communities, in your country’. ‘We can and we will choose a better way’, the 49-year-old leader vowed.

Trudeau said ‘the attack was not a one-off, citing numerous eruptions of anti-Muslim violence in recent years that have claimed lives, revealing a troubling streak of Islamophobia in Canada. They were all targeted because of their Muslim faith. This is happening here, in Canada, and it has to stop’, he stressed.

The 23rd Prime Minister of the North American country pointed out that ‘such attacks are fuelled by toxic rhetoric and discrimination and online extremism that has been allowed to fester, vowing to redouble the government's efforts to dismantle far-right groups that encourage such activities that continue to threaten public safety’.

ISLAMABAD – Prime Minister Imran Khan Tuesday said that he was saddened to learn of the killing of a ...

On Sunday, a driver crashed a pickup truck into a Pakistani origin family of five, killing four of them while injuring the 9-year-old in a planned attack as the victims were Muslims.

The 20-year-old attacker, apprehended shortly after the attack, has been charged with four counts of first-degree murder and one count of attempted murder, while several leaders of the Muslim community have called on the courts to classify the episode as an act of terrorism.

French President Emmanuel Macron was slapped in the face by a man during an official visit to the southeast of ...