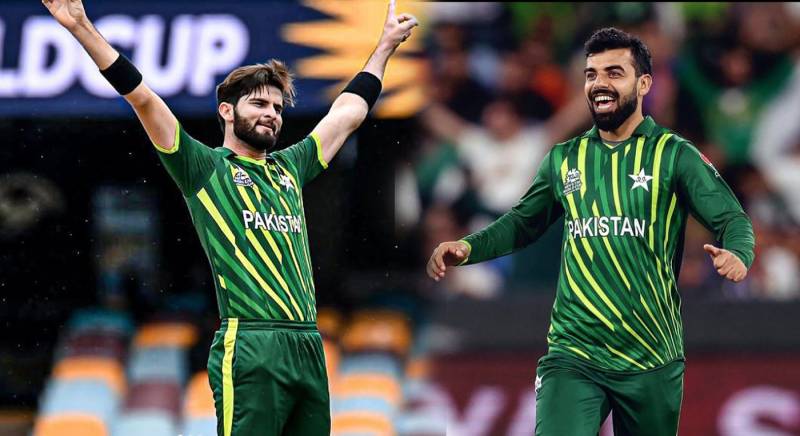 DUBAI – The top cricket body on Friday released the list of 9 performers nominated for the Player of the Tournament award.

The 9-member shortlist for the Player of the Tournament includes Pakistani ace speedster Shaheen Shah Afridi and vice-captain Shadab Khan. Both players hold the highest wickets for Green Shirts in the ICC T20 World Cup.

In a press release, the ICC said “Shadab Khan has been one of Pakistan's star performers in their run to the final of the tournament, starring with both bat and ball. He has been an impactful performer, picking up vital wickets in the middle overs while also playing the role of power-hitter in the middle order brilliantly”.

It further mentioned that Khan’s major contribution with the bat came during Pakistan's clash against Proteas, as he scored a blistering half-ton. With the ball, he got 10 scalps in six games, with best figures of 3/22 and a miserly economy of 6.59.

Shaheen Afridi, who returned after injury, was praised by top cricket body. “Shaheen Afridi has slowly but surely regained his groove in the tournament, being back to his best in the last couple of games. The pacer went wicketless in his first two games but has then gone on to scalp 10 in the next four matches, as Pakistan roared their way back from the brink to reach the finals,” the ICC said.

It continued saying that “Overall, he [Shaheen] has 10 wickets in six matches at an average of 14.20 and an exceptional economy of 6.17. Pakistan will again bank on him to work his magic in the final against England.”

SYDNEY – Pakistani skipper Babar Azam and flamboyant batter Mohammad Rizwan put on yet another 100-plus ...

SYDNEY – Pakistan's defeat against Zimbabwe in the ongoing T20 World Cup has triggered different reactions while ...