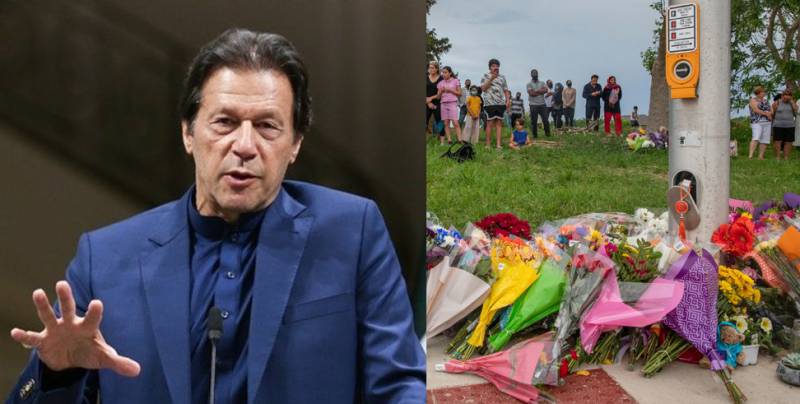 ISLAMABAD – Prime Minister Imran Khan on Saturday called upon the world leaders to launch a crackdown on online hate and extremism after the hate-fuelled attack in Canada which has shocked everyone.

The premier, while speaking with Canadian Broadcasting Corporation’s chief political correspondent Rosemary Barton, said the murder of a Muslim family in Canada has shocked everyone in Pakistan.

‘Everyone is shocked in Pakistan because we saw the family picture, and so a family being targeted like that has had a deep impact in Pakistan. Adding that, ‘the recent pattern of domestic terror in West demanded a heightened focus on online radicalization.’

PM @ImranKhanPTI`s interview on CBC on #Islamophobia & #Muslim family was living in Canada. PM is calling on world leaders to crack down on online hate & #Extremism following the deadly truck attack in London, Ont. now being investigated by authorities as a possible act of terror pic.twitter.com/pjgfEGLzOk

PM further added that ‘he had raised the issue with his Canadian counterpart Justin Trudeau, describing him as a leader who understood the importance of fighting online hate and Islamophobia, Khan called o other leaders to make such commitment.’

On June 6, a Pakistani origin Canadian Muslim family lost members for three generations after it was targeted in an Islamophobic attack.

A pick-up truck ran over them in Canada's Ontario province while they were waiting on the sidewalk to cross the road.

Meanwhile, Canadian premier Trudeau also pledged to crack down on online hate speech when he introduced a new digital charter in 2019, though critics say Ottawa had been slow to implement changes that could stop online radicalization.