WATCH - US diver survives being swallowed alive by a humpback whale 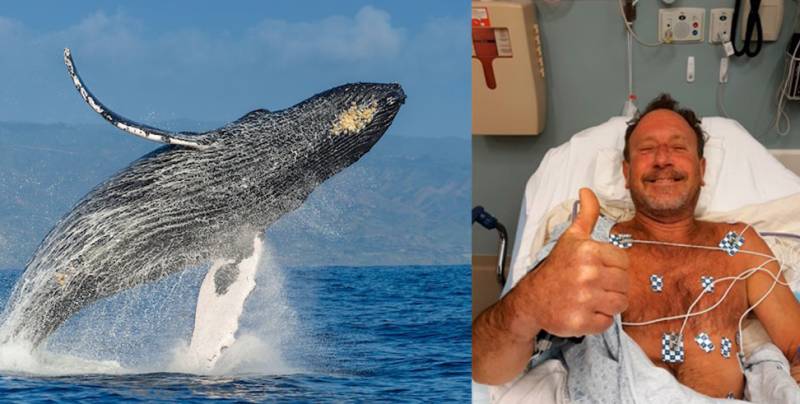 CAPE COD – A lobster fisherman from Cape Cod in the United States, trying to catch lobster Friday morning, got swallowed by a ‘gentle giant of the ocean’ and yet lived to tell the mind-boggling story.

Michael Packard, 56, speaking with a broadsheet daily newspaper, said after jumping off the vessel in scuba gear into the water, I felt a huge bump and everything went dark. I was out diving about 45ft deep in the waters when the unusual incident occurred.

Adding that he at first thought he had been attacked by a shark but then realised he could not feel any teeth and neither feel any kind of pain. He went on to say that ‘I realised, oh my God, I’m in a whale’s mouth and he’s trying to swallow me and I thought to myself, okay, this is it I’m gonna die.’

But soon after losing the hope, the lobsterman said he continued to breathe because he still had his breathing apparatus in. Then all of a sudden, the humpback came to the surface and just thrown him in the air after which he landed in the water.

The survivor while speaking this moment said ‘I was free and I just floated there. I couldn't believe, I'm here to tell it.’

Later, Packard was rescued by his crewmate in the surface boat. Doctors suspected that he’d broken at least one of his legs, but it seemed fine as only bruised.

KARACHI - After having scared users on digital platforms through a game named after it, a giant Blue Whale physically ...

Experts while commenting about the incident said such human-whale encounters are rare. These giants mammals can grow to as long as 50ft and weigh about 36 tons are generally not aggressive.

The non-toothed whales do not attack or eat human beings as they typically eat shrimps and small fishes.

GWADAR – A fisherman in Gwadar managed to catch a precious croaker fish worth Rs7.2 million near the coast of ...