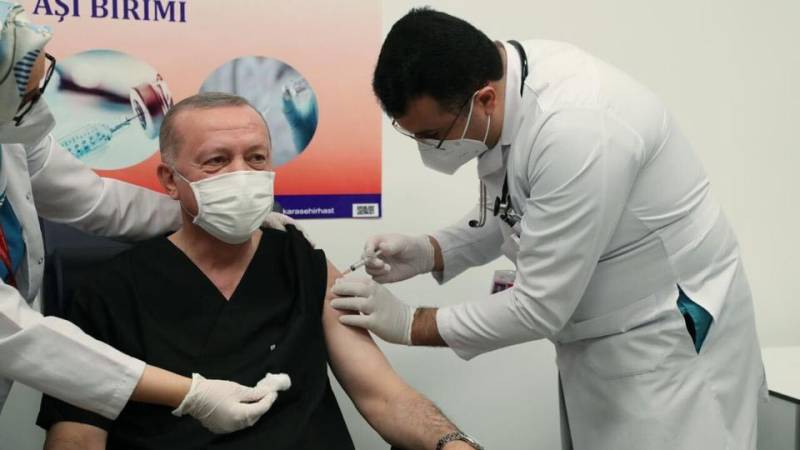 “As part of our successful vaccination program, 254,000 healthcare workers have had their first dose of vaccines so far. I have also joined them and received the vaccine. We aim to vaccinate all our citizens in a very short time,” TRT world quoted Erdogan as saying.

The Turkish president will be administered second dose of the vaccine after four weeks.

Earlier, the health workers were given first doses of the vaccine, a day after Turkish Health Minister Fahrettin Koca became the first person in Turkey to get a shot of CoronaVac outside of the country's trials of the vaccine.

The minister on the occasion vowed to distribute the vaccine fairly, adding that there will be no other practice other than the priority set by the [Coronavirus] Scientific Board.

He said that every person should get vaccinated to return to normal daily lives.

On Wednesday, Turkey's official drug and medical equipment body gave go-ahead for emergency use of CoronaVac. Turkey received three million doses of the vaccine from SinoVac on December 30. They have been kept at a medical storage facility under controlled temperature.

Turkey accounted 8,962 new coronavirus infections on Thursday, taking overall case tally to around 2.36 million, according to Health Ministry data. The nationwide death toll hit 23,495 with 170 new fatalities recorded over the past day.

ISLAMABAD – Chief of the Air Staff Air Chief Marshal Mujahid Anwar Khan, who is on a 4-day official visit to ...