Social media is furious at Trump's behaviour with the Queen, see for yourself 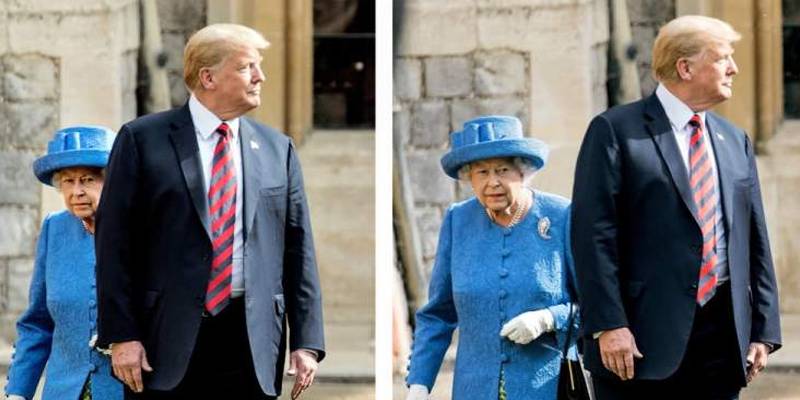 LAHORE - Trump is often hated for his choices. People certainly love to hate him and hate to love him! And here he is, again a part of a furious backlash. He has managed to make the public question his sanity once again by acting strangely in front of Queen Elizabeth.

People are watching their meeting closely in Windsor Castle and they are amused by Trump and his wife,   Melania Trump, who are clueless about royal protocol or are too cool to follow it.

I’m no royalty expert, but I’m confident cutting the Queen off is frowned upon 😐pic.twitter.com/c2KSkUn145

The Queen was not bowed to, or given curtsy to. She was made to wait for 12 to 15 minutes as well as she could be seen looking at her watch. Then Trump walked ahead of her and even stopped in his own thoughts while the Queen shuffled around him even though she had clearly pointed towards the left to make him take that route.

Wow, lol. Even if she wasn’t the Queen, wouldn’t you let an elderly lady walk ahead of you??
He acts like he was raised in a barn. 🙄

"Trump has also turned his back on the Queen. I have always believed this to be a mortal insult to a monarch. #offwithhishead #pulledapartbyhorses," tweeted Ian Beck.

Well, that was amusing.