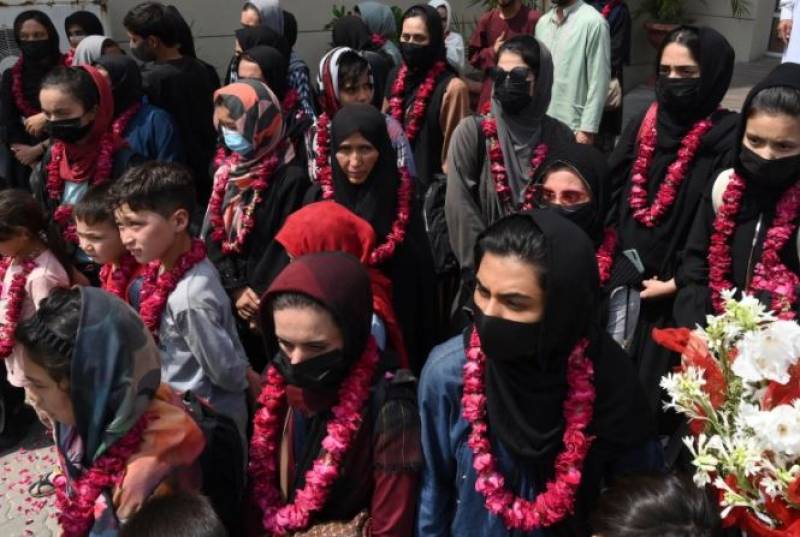 Reports said that the members of the Afghanistan’s junior girls team were facing threats over the involvement in sports. The team had been scheduled to head to Qatar, where a special accommodation facility has been set up for Afghan players for the 2022 FIFA World Cup.

“We welcome Afghanistan Women football team they arrived at Torkham Border from Afghanistan. The players were in possession of valid Afghanistan Passport, Pakistan visa and were received by Nouman Nadeem of PFF (Pakistan Football Federation),” Chaudhry tweeted on Wednesday, providing no further details.

In total, more than 75 people crossed into Pakistan, before travelling to Lahore where they were welcomed with flower garlands.

The female footballers are expected to travel on to Qatar’s capital, Doha, reports said.

Earlier this month, the Taliban’s cultural commission head, Ahmadullah Wasiq sid that women in Afghanistan will not be allowed to play cricket or any sport under the new administration.

In an interview with the Australian broadcaster SBS, he said “women’s sport was considered neither appropriate nor necessary”.

“I don’t think women will be allowed to play cricket because it is not necessary that women should play cricket,” he opined saying “In cricket, they might face a situation where their face and body will not be covered and Islam does not allow women to be seen like this”.

KABUL – The Taliban have allowed Afghanistan’s cricket team to play first Test match since their takeover, ...