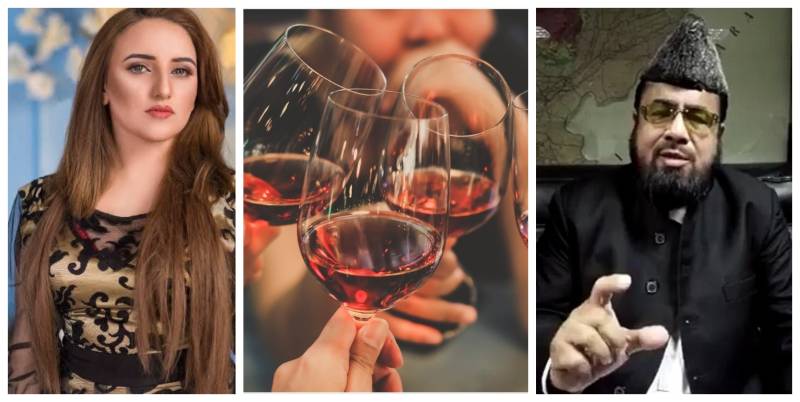 LAHORE – One of Pakistan’s most-followed TikTok stars, Hareem Shah has leaked another video of controversial cleric Mufti Abdul Qavi only a day after a video of him getting slapped by her secretary went viral on the internet.

In the latest video secretly recorded by a smartphone, Mufti can be seen talking bluntly about his habits of consuming alcohol and drugs and having night parties while feasting on a meal with Hareem and her associates.

When asked which brand or kind of alcoholic drink he prefers, the former president of PTI’s religious affairs said although he doesn’t know the exact names of the drinks, he only enjoys the ‘Red’ one (referring to Red Wine), calling it “mashroob e maghrib”.

“Doctors say it (red wine) is good for my heart,” he said while justifying his ‘drinking problem’.

“Wine makes you more good looking, it’s good for heart as well and it also tastes better,” he can be heard adding to that.

To another question about who will join him for tonight’s party, the former PTI member replied “not one but many!”

“It is women’s wish to enjoy my company” he continued.

Qavi also gave the reason for mentioning the name of Sandal Khattak, a close friend of Hareem Shah, in a TV show. “I didn’t name you as you belonged to a Pashtoon family and people might attack you if I named you.”

The controversial cleric says he fears for the safety of TikTok star and her friend Sandal Khattak.

Mufti Abdul Qawi, who hails from Multan, has been in the past nominated in the murder case of social media activist and model Qandeel Baloch. His name was mentioned in the First Incident Report (FIR) on the application of Qandeel's father Azeem, but he was later acquitted after a police investigation.

Revealing other secrets, Qavi told the girls that using drugs is very common nowadays, adding that he only used to smoke marijuana and “has five blunts with him at the moment”.

Since leaked on social media, the video has sparked outrage in the country as an Islamic scholar talking about these prohibited activities makes people think twice about having any opinions.

Earlier, in Tuesday’s video, Hareem Shah’s secretary was seen slapping the controversial religious scholar after he allegedly engaged in a “vulgar” conversation with her.

Speaking to a private news channel, Hareem said that hit her “friend” after losing patience with him.

"He spoke salaciously and we have recorded the whole conversation," the TikToker went on to say.

Qavi, however, has denied the accusation, saying he was only drinking tea when Shah slapped him.

"There was a woman with Hareem Shah," the cleric said. "She (Shah) slapped me and the other woman took the video."

#HareemShah became one of the top trends in the country with netizens criticising Hareem over the physical assault.

MULTAN - The parents of late-model Qandeel Baloch have announced a pardon for their sons, submitting an affidavit in ...