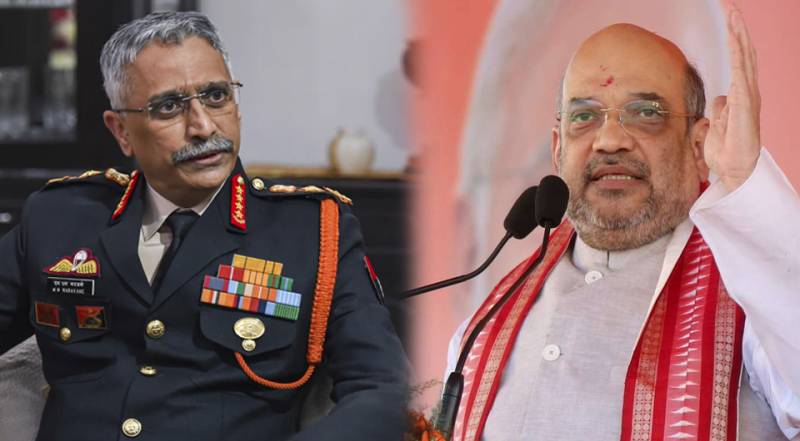 LONDON – Stoke White, a law firm based in the British capital, has filed an application with local police for the arrest of Indian army chief and home affairs minister Amit Shah over their roles in war crimes in Indian Illegally Occupied Jammu and Kashmir.

Report of Associated Press said the London-based law firm has submitted evidence including 2,000 testimonies to British cops documenting how Indian forces led by General Naravane and Home Minister Amit Shah were directly involved in vicious torture and war crimes in the caged valley.

The report submitted to British cops revealed that Indian forces, on the directives of the Hindu nationalist party, were directly involved in the abduction, and killings of civilians, social workers, and media persons.

Director of international law at Stoke White, Hakan Camuz, expressed hope to convince British law enforcers that would start a probe and ultimately arrest the officials when they set foot in the Kingdom.

The report exposing atrocities on Kashmir stated “there is strong reason to believe that Indian authorities are conducting war crimes and other violence against civilians in Jammu and Kashmir”.

The application to British cops was made under the principle of universal jurisdiction, which gives countries the authority to prosecute individuals accused of crimes against humanity committed anywhere in the world.

The law firm also revealed that it is the first time that legal action has been taken abroad against Indian authorities over alleged war crimes in illegally occupied Kashmir.

“We are asking the British officials to do their duty and investigate and arrest them for what they did based on the evidence we supplied to them. We want them to be held accountable,” Stoke White director said.

Meanwhile, the application was made on behalf of the family of Zia Mustafa, a detained Kashmiri citizen, and the behalf of human rights campaigner Muhammad Ahsan Untoo, who was also detained and severely tortured last week.

Genocide Watch warns of impending killings of Muslims in India

Genocide of Muslims in India could be about to take place, President Genocide Watch Dr Gregory Stanton warned saying, the international community should play its part in confronting ‘Hindutva‘ideology in India.

He mentions the lack of strict legal action from the GoI.

He concludes with how he had predicted the genocide in Rwanda with the full awareness of its leader, and similar is happening in India. pic.twitter.com/vtxBnM8arJ

Dr Stanton has made these remarks during a US Congressional briefing titled 'Call For Genocide of Indian Muslims', organized by the Indian American Muslim Council.

Earlier, a report of KMS revealed that the Indian army is the most brutal force in the world as its troops are committing war crimes and crimes against humanity in Indian illegally occupied Jammu and Kashmir (IIOJK).

The report said that when India is celebrating its 74th Army Day, its troops continue to perpetrate grave human rights violations in the occupied territory. It said the Indian army is trained in committing genocide, crimes against humanity, and war crimes.