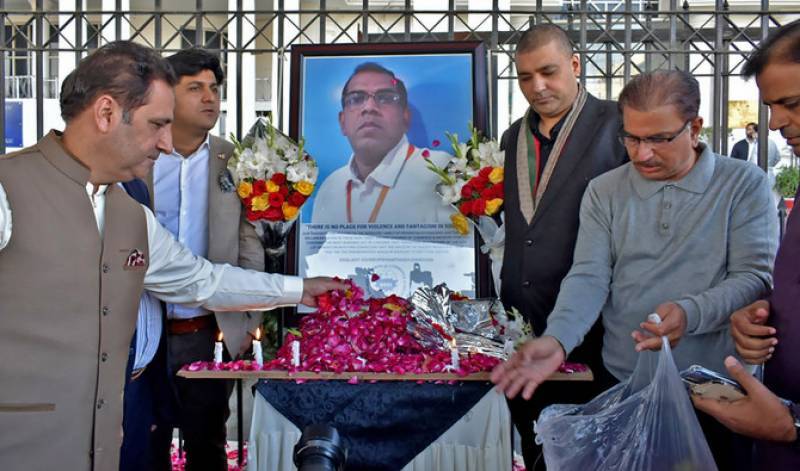 GUJRANWALA – An anti-terrorism court Friday sentenced a man to one year in jail for supporting the suspects involved in lynching of a Sri Lankan national in Sialkot.

The court has imposed a fine of Rs10,000 on the suspect named Adnan while making the first conviction in the case.

Adnan had uploaded a video on YouTube and spoke in favour of the culprits who had killed the foreign national, identified as Priyantha Kumara.

A case was registered against him at Rang Pura police station in Sialkot under charges of abetting the crime.

Kumara, 48, who worked as a general manager at a sports apparel factory in Sialko, was attacked by a mob of hundreds of people, and set on fire on December 3 over the allegations of blasphemy.

Police have arrested dozens of people in the case and they are being trialed by an anti-terrorism court.

Meanwhile, the wife of the Sri Lankan national has demanded Prime Minister Imran Khan to ensure justice in the case.

While speaking at memorial event organized Pakistan High Commissioner in Colombo on Thursday, she said: “I request Imran Khan to bring justice to my husband and punish the culprits as soon as possible. This is not to take revenge. But this should not happen to anyone in future”.

“I thank all the Pakistanis who supported me in this difficult situation and all staff of the high commission for arranging this event. Also, I would like to thank Sri Lankan president, prime minister, other ministers and media institutions for supporting me,” Arab News quoted her as saying.