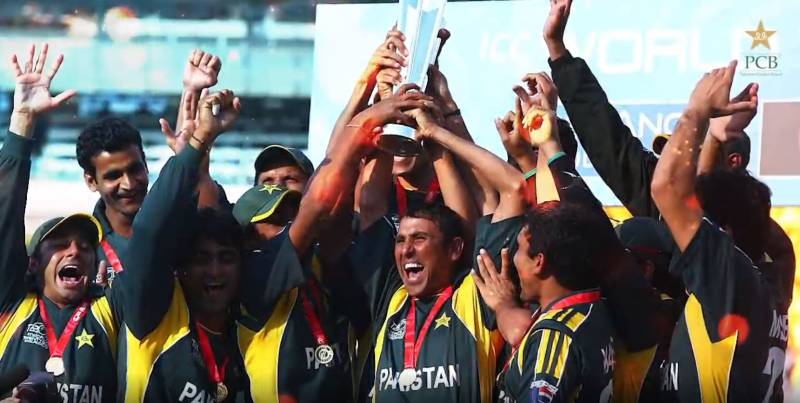 LAHORE – It was June 21, 2009, when Men in Green stormed to World Twenty20 victory after beating Lankan tigers in the final, and lifted their maiden ICC T20 World Cup trophy.

Thirteen years after the glorious moment, the Pakistan Cricket Board has finally honoured the winning team for that success.

The PCB shared a documentary showing glimpses of the iconic win.

“A journey through Pakistan's unforgettable T20 World Cup triumph in 2009, Squad members from that iconic win take us through Pakistan’s maiden T20 world title and recall some never heard before stories,” the PCB wrote on Twitter.

🎥 A journey through Pakistan's unforgettable @T20WorldCup triumph in 2009 🤩

Squad members from that iconic win take us through 🇵🇰's maiden T20 world title 🏆 and recall some never heard before stories 👏#WeHaveWeWill pic.twitter.com/H9f5esPlqY

The Younus Khan-led squad chased down the 139-run target in the 19th over as Shahid Afridi starred with an unbeaten 54-run inning.

Afridi was named Man of the Match for his excellent inning as well as his contribution with the ball – the leg-spinner picked 1-20 in his limited overs.

The Lankan side got off to a bad start as they lost openers with just 32 runs on the board. Tillakaratne Dilshan and Jehan Mubarak returned to pavilion on the duck while Sanath Jayasuriya made 17 runs and Mahela Jayawardena just 1.

Legendary Sangakkara played an unbeaten knock of 64 runs to take the side's total to 138/6 in the allotted 20 overs.

Pakistanis are celebrating the fifth anniversary of the 2017 Champions Trophy when the Sarfraz-led squad bagged the ...

Chasing 139, Kamran Akmal and Shahzaib Hasan provided a steady start as they put up an opening stand of 48 runs.