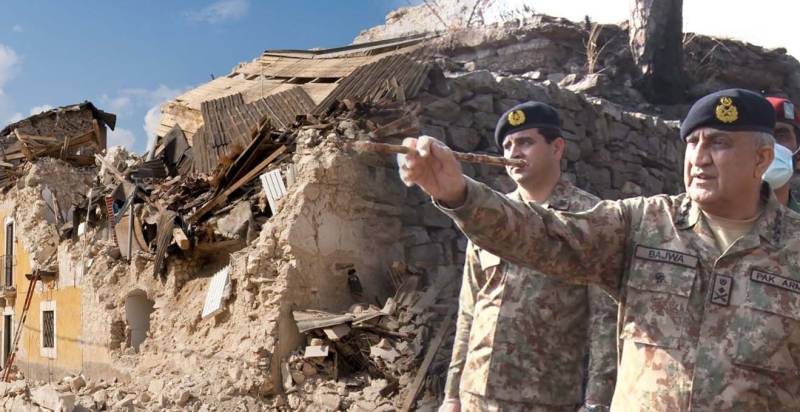 A tweet shared by a military spokesperson said Chairman Joint Chiefs of Staff Committee and Services Chiefs express deepest condolences over the tragic loss of precious lives and damage to infrastructure due to earthquake and torrential floods in various areas of Afghanistan.

It added that the armed forces are ready to provide all possible humanitarian assistance to the people of Afghanistan.

CJCSC & Services Chiefs express deepest condolences over tragic loss of precious lives & damage to infrastructure due to earthquake & torrential floods in various areas of Afghanistan. AFs of Pakistan are ready to provide all possible humanitarian assistance to people of Afg.

Earlier in the day, Prime Minister Shehbaz Sharif expressed grief over loss of precious lives in the unfortunate incident. Pakistan stands with Afghan brothers and sisters in this difficult time and it will provide all possible assistance to the people of Afghanistan, he said.

Foreign Office also issued a statement, saying Pakistani institutions are working to extend required assistance to Afghanistan in coordination with their relevant authorities.

The recent quake is said to be the deadliest to hit the landlocked country in decades and comes as the Taliban-ruled nation is in the throes of a hunger crisis.

ISLAMABAD – Prime Minister Shehbaz Sharif has expressed grief and sorrow over the loss of precious lives in ...

The earthquake, registered at a depth of 10 kms, hit the city of Khost, which lies close to the country's border with Pakistan.

Most of the casualties were reported in Paktika province, in the districts of Giyan, Nika, Barmal and Zirok, per reports.

The disastrous event occurred as the majority of Afghans are experiencing hunger, as the US and its allies halted about $7 billion of the country's foreign reserves and cut off international funding.

KABUL – A 6.1 magnitude earthquake has killed at least 950 people and injured several others in east of ...