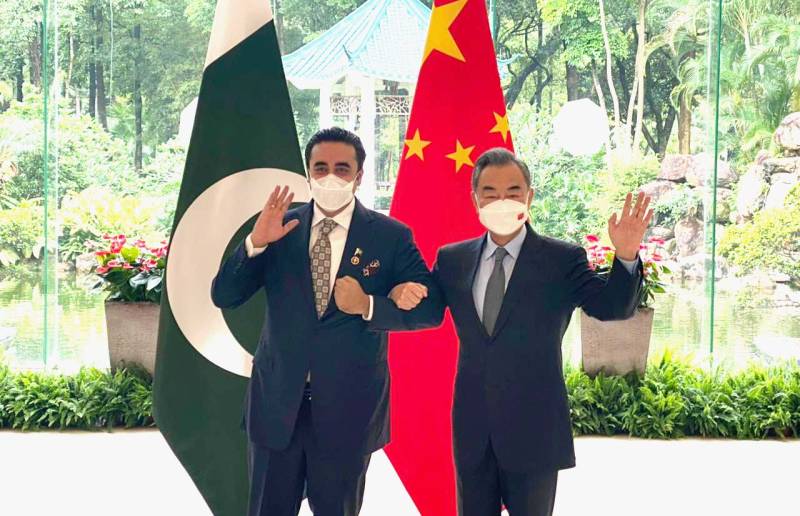 Both leaders met in the northwestern port city of Guangzhou, where the foreign minister arrived earlier today on his first bilateral visit at Wang's invitation since assuming office in April.

Current regional and global developments also came under discussion during the meeting.

Addressing a media briefing in the northern neighbouring country, the PPP leader highlighted the importance of ties with Beijing, saying China was the first country on his bilateral visit.

“Pakistan is committed to a one-China policy and will continue to support it in its policy,” Bilawal said, as he also offered condolences to the Chinese people on the death of three Chinese tutors in the Karachi University blast.

The young politician vowed not to allow forces to destroy bilateral ties between the iron brothers, saying Pakistan will not rest until the perpetrators of the KU blast are brought to justice.

Bilawal assured the Chinese workers of providing full security to them. “Pakistan associates paramount security to Chinese national,” he said while assuring that the country has taken special measures for their safety.

The newly appointed Foreign Minister stressed dialogue and diplomacy to resolve issues, adding that the prevailing situation in war-torn Afghanistan poses a threat to the region.

The two dignitaries also discussed the grave situation in Indian Illegally Occupied Jammu and Kashmir, with the PPP leader thanking China for its consistent support of the longstanding dispute.

ISLAMABAD – The newly installed Foreign Minister Bilawal Bhutto-Zardari on Tuesday paid a visit to the Chinese ...