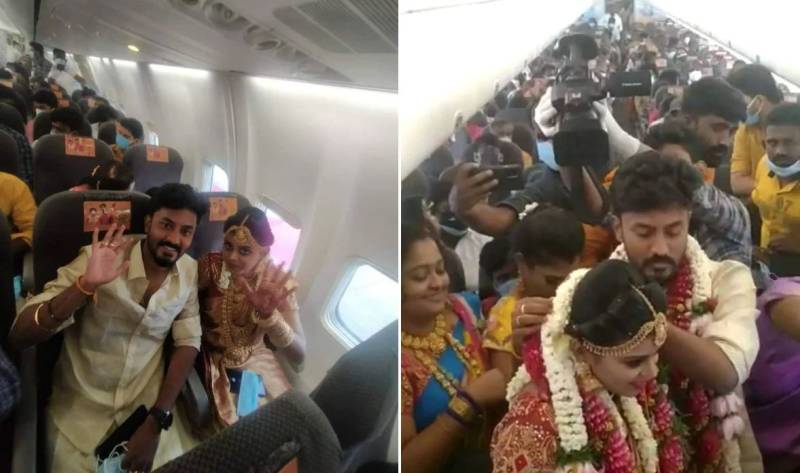 BANGALORE – Couples in the second-most populous country seemed exceptionally desperate to get hitched as after tying knots in PPE kits and in medical facilities, another couple booked an entire flight for a mid-air wedding to dodge Covid-19 restrictions.

This time the craze of the traditional big fat wedding goes into the skies as a couple from Tamil Nadu, a southern state in India, booked the entire flight from Madurai to Bangalore to hold their extravagant wedding in the presence of family as lockdown continued amid the skyrocketing surge of Covid cases.

The desperate couple booked the plane on May 23 with at least 170 guests in attendance. The couple then performed rituals in the presence of family and friends while the plane was over the Meenakshi Amman temple of Tamil Nadu.

Rakesh-Dakshina from Madurai, who rented a plane for two hours and got married in the wedding sky. Family members who flew from Madurai to Bangalore after getting married by SpiceJet flight from Bangalore to Madurai. #COVID19India #lockdown @TV9Telugu #weddingrestrictions pic.twitter.com/9nDyn3MM4n

Many of the clips of the mid-air ceremony showed the fully packed jet while the couple can be seen donning wedding attire. The footage from the unusual wedding has been uploaded on different social media accounts which later alarmed the aviation and health officials as the country reported record cases in recent times.

The mid-air ceremony faced extreme criticism as people slammed all attendants for flouting Covid restrictions. Many of the attendants including the newlywed didn't wear face masks besides breaching social distancing rules.

DGCA has initiated investigations on mid-air marriage. It has sought a full report from the airline & Airport Authority. SpiceJet crew is off rostered. Airline directed to lodge complaint against those not following COVID appropriate behavior with relevant authorities: DGCA pic.twitter.com/aTNyjIKOFO

Soon after the outcry, the Directorate General of Civil Aviation (DGCA), the country’s top aviation body, comes into action and suspended all the crew involved. ‘We have de-rostered the crew and directed the airline to lodge a complaint against those not following Covid-19 appropriate behaviour with relevant authorities. We will take strict action’, a statement from DGCA official stated.

With the third wave of coronavirus hitting the world, netizens have found modern solutions to resolve their problems ...

Meanwhile, the Indian private air carrier negated the claim to organize the wedding claiming that ‘they were unaware of the actual intentions of the passengers as passengers booked the flight for a post-wedding joyride’.

India’s overall death toll from the novel virus has crossed 300,000. The country is second among the most affected countries by active cases while the total caseload of cases stands at 26,752,447.

ISLAMABAD – The Pakistan Foreign Office asked 12 members of the Indian High Commission (IHC) to quarantine as a ...