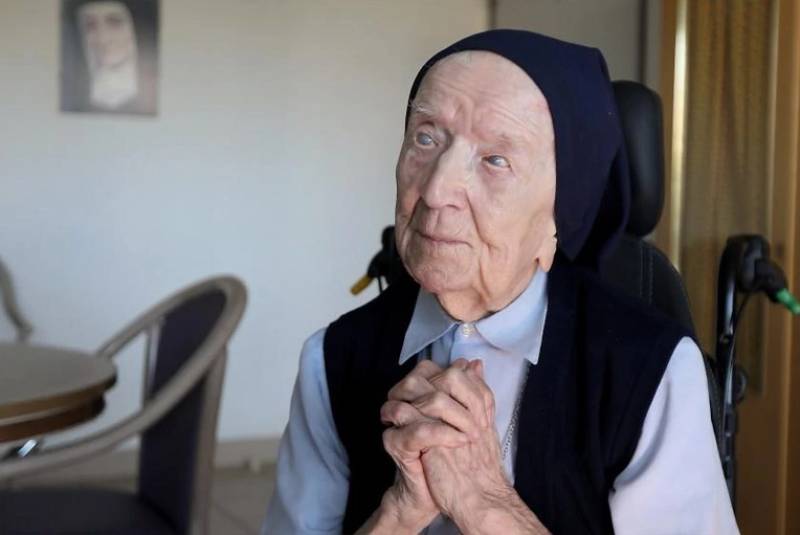 A 118-year-old French nun, who is known as Sister Andre, has become the oldest living person, a day after the death of Japanese supercentenarian Kane Tanaka, according to the International Database on Longevity (IDL) and Guinness World Records.

Lucile Randon, who was born in southern France before World War I, currently resides at a nursing home in Toulon along the Mediterranean coast. According to an official there, Sister Andre’s real goal is to overtake a French woman who was reportedly 122-years-old when she passed away in the year 1997.

During an interaction with media correspondents, she said that people believe that work kills, for me it kept me alive, I kept working until I was 108.

Sister André, born 11 February 1904 as Lucile Randon, is the oldest living person as well as the world's oldest nun and the oldest person to survive COVID-19 🙏 pic.twitter.com/3HisPI4saO

Andre, who is blind and uses a wheelchair, used to work as a governess in Paris before pledging to serve with the Daughters of Charity. She called the period ‘the happiest time of her life’.

The new oldest living person even received a handwritten New Year's greeting from President Emmanuel Macron this year, among several gifts and treats sent by her well-wishers.

The oldest person even survived Covid-19, just days before her 117th birthday. Randon tested positive for novel virus but didn't develop any symptoms.

TOKYO – Japanese supercentenarian and the world’s oldest person Kane Tanaka has passed away at the age of ...

She was named the world's oldest person soon after the death of Japan’s Kane Tanaka, who passed away at 119. Most centenarians are reportedly found in Japan or on the Italian island however the Western Europe country known for sweet-scented lavender fields is not among the blue zones.