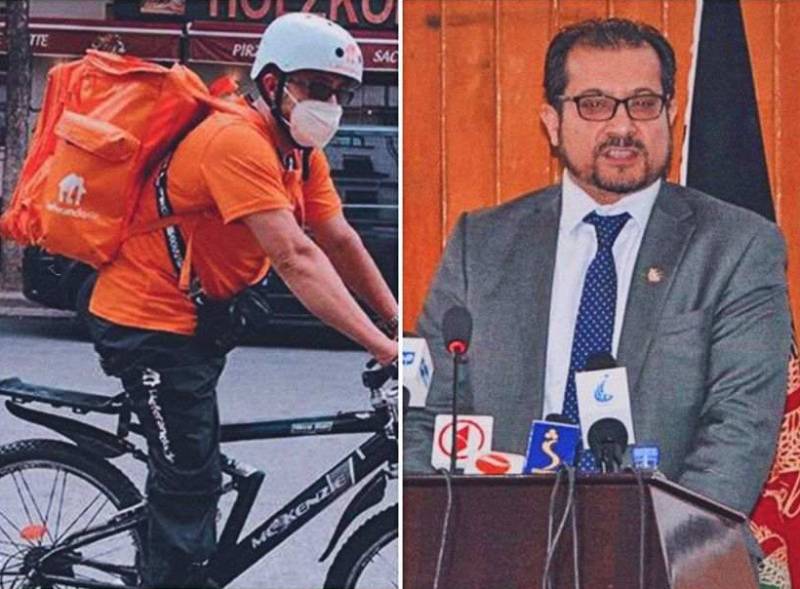 A German daily Leipziger Volkszeitung published the story of a former Afghanistan minister who can be seen wearing an orange-colored t-shirt with a bag hung on his back in Leipzig - the eighth-most populous city in the Western European country.

Sadat, who resigned in 2020 after a dispute with Ashraf Ghani-led Afghan government, traveled to Germany. However, Shah was reportedly compelled to work as a pizza delivery boy to make ends meet despite the fact that he holds two master's degrees in communications and electronic engineering from Oxford University.

Meanwhile, a German journalist claimed that he had spotted Shah on the streets of Leipzig. “I met the man, who claimed to have been the Afghan minister for two years ago, a few days ago. “I'm driving out of Essen for Lieferando”, Shah responded to the journo when he asked that what he was doing in Leipzig.

Later, the ex-Afghan minister confirmed that the pictures circulating were indeed his while he spoke to Sky News Arabia. Saadat further mentioned that “his story should serve as a catalyst to change the way high-ranking people live their lives in Asia and the Arab world”.

Meanwhile, the clicks of the former Afghan minister, who earlier worked as chief executive officer of Ariana Telecom in London, are doing rounds on social media at the time when his native country has been seized by the Taliban while foreign forces engaged in the evacuation process of people from different countries.

PESHAWAR – In a bizarre incident amid the dramatic evacuation from Afghanistan’s capital, a Pakistani truck ...

Furthermore, Shah while commenting on the current situation in Afghanistan said “he never thought the civilian government would fall this fast”.