Says Pakistan will not become part of any foreign conflict 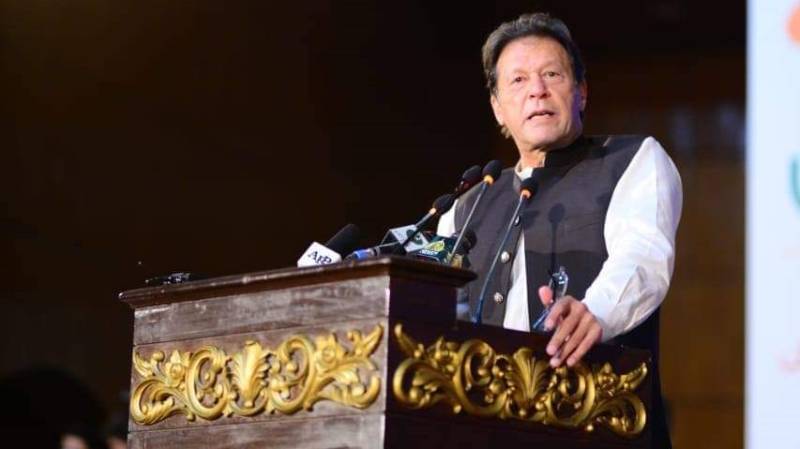 ISLAMABAD – Prime Minister Imran Khan on Thursday presented to the nation a review of his party's three-year performance.

Speaking to a gathering at Jinnah Convention Centre in Islamabad, the prime minister detailed the struggles his government faced on the economic front over the first three years of their mandated five-year tenure and said he had inherited a country heading towards bankruptcy.

He said, "We had no capital to settle loans. We had no foreign exchange. The current account deficit we faced was of $20 billion. If Saudi Arabia, China and UAE had not helped us at the time, rupee would have declined further and caused us some real damage."

"We had to go to the IMF and whoever you acquire loan from they set [certain] conditions," he said.

Khan talked about the country's tiff with India in the aftermath of Pulwama incident and thanked the armed forces for their part. He said, "I appreciate our army and air force. As they (Indian fighter jets) came into our territory and launched an offensive, we realised the [power] of our army."

Without naming anyone, Khan accused a "mafia" of defaming state institutions, particularly the army. "I also criticised the army in the past," he said. "Judiciary and army also make mistakes but it doesn't mean we should [expect] them to topple the democratic government.

"We know the Indian lobby is trying hard to defame Pakistan Army. They are implying that the Taliban won because of Pakistan Army."

He highlighted his government's handling of the coronavirus pandemic, recalling how he resisted the pressure to impose a "blanket lockdown and by the grace of Allah we were protected".

"The WEF (World Economic Forum) praised Pakistan for its handling of Covid-19, and the Economist [acknowledged] Pakistan for being one of three countries that effectively tackled the coronavirus," he said.

He then shed light on his government's economic performance, saying: "When we assumed power, the [current account] deficit was $20billion and now it is $1.8bn. Our foreign currency reserves were $16.4bn when we assumed power and today they are at $27bn. Our tax collection was Rs3800bn three years ago and now it has reached Rs4700bn.

"We witnessed record sales in motorcycles and tractors, while car sales saw an 85pc increase. It means that the people's lifestyle is improving," he said.

Defending the authenticity of the figures he quoted, PM Imran quipped: "These figures are not of Ishaq Dar's; these are real."

The prime minister accused his rivals of "spreading hopelessness because they want the old system back".

"In our tenure, Punjab's anti-corruption has recovered Rs450bn so far," he said, adding. "NAB (National Accountability Bureau), in its 18 years before we came to power, had recovered Rs290bn and in last three years they recovered Rs519bn. All hue and cry is because of this reason."

He mentioned his government's social uplift schemes such as Kamyab Pakistan and Ehsaas Programme, saying that the latter was rated "third best in the world" by the World Bank.

The prime minister reminded his audience of the efforts made to "empower women" in rural areas and stressed the need to educate women, adding that "this is what we are trying to do."

"We are also working on inheritance laws to ensure women get their due share in property," he added.

Khan said his government's relief work transcended jurisdictions. "We don't have governments in Sindh and Balochistan but we gave relief packages there, too, for the poor."

LAHORE – The Pakistan Tehreek-e-Insaf (PTI) on Thursday faced criticism over the photos it used in an ...

Pakistan Will Not Become Part Of Any Foreign Conflict

The prime minister said that Pakistan will not become part of any foreign conflict and vowed to uplift the country economically. Talking about the evolving situation in Afghanistan, Khan urged the international community to play its due role in bringing peace to Afghanistan. He said the Taliban have assured to form an inclusive government for durable peace in Afghanistan and the world community should help them achieving this goal.