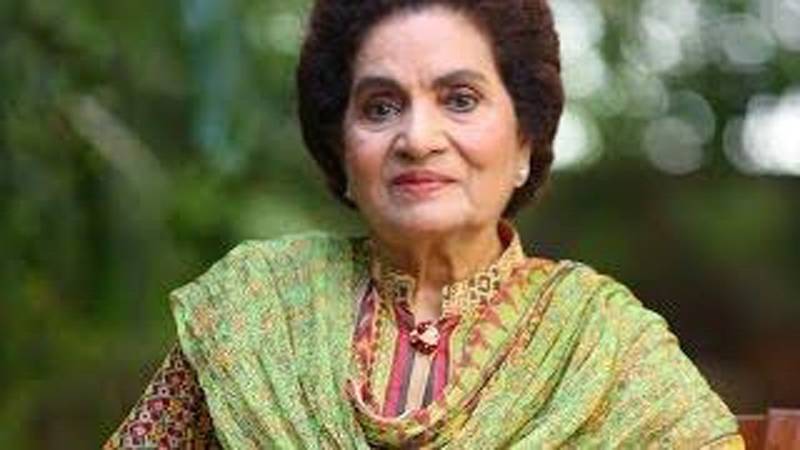 Pakistani dramatist-scriptwriter Haseena Moin breathed her last on Friday. She was 79 years old. Battling cancer for the past few years, her funeral will be held at her residence in North Nazimabad after Asr prayers.

Being one of the most celebrated scriptwriters of Pakistan, Moin has several accolades under her belt. Further, she holds the distinction of penning Pakistan’s first original script, Kiran Kahani, in the early 1970s.

Celebrities were quick to step forwards as they were saddened to lose the legend.

Sharing a throwback photo of Moin, superstar Humayun Saeed wrote, “Haseena apa's invaluable contribution to our drama industry helped pave the way for many. Not only was she a great writer but a woman of great strength who continued to mentor us till her last breath. May she rest.”

Haseena apa's invaluable contribution to our drama industry helped pave the way for many. Not only was she a great writer but a woman of great strength who continued to mentor us till her last breath. May she rest in eternal peace pic.twitter.com/fJIIJ38jYL

" just met you 2 weeks back didn't know we would be losing you this soon... Even then on set you were full of life zest and so passionate about the project... Rest in peace Hasina Apa thank you sooo much for all your timeless contribution. I will always cherish to have worked in your serials & long plays "

Imran Abbas tweeted, "Haseena Apa! We can’t thank enough you for  taking Pakistani Drama to this height, for portraying the strength of women through your masterpieces, for stashing our memory with “ankahi” feelings of love and emotions. The creator of best dramas in the history of Pakistani Drama and writer of my first serial “Haseena Moin” left us for eternity. These “tanhaiyyan” would always be there without you Apa! You deserve a never ending ovation. Inna Lillahe Wa Inna Elehe Rajeoon."

"No amount of adjectives would do justice to the immense talent of Haseena Moin or Haseena apa as she was lovingly called, who left us today. Her acclaimed writings brought a refreshing angle to dramas and plays, positioning women as independent and empowered. You will be thoroughly missed, apa!.", the Meray Paas Tum Ho star said.

Condolences poured in from all quarters over the sad demise of the legendary dramatist.

The literary genius has many dramas under her belts like Dhoop Kinary, Ankhai, Tanhaiyan, Ahat, Ansoo and many more.