"Will disclose every detail about bribe offer in court," Imran says at first post-Panama verdict rally 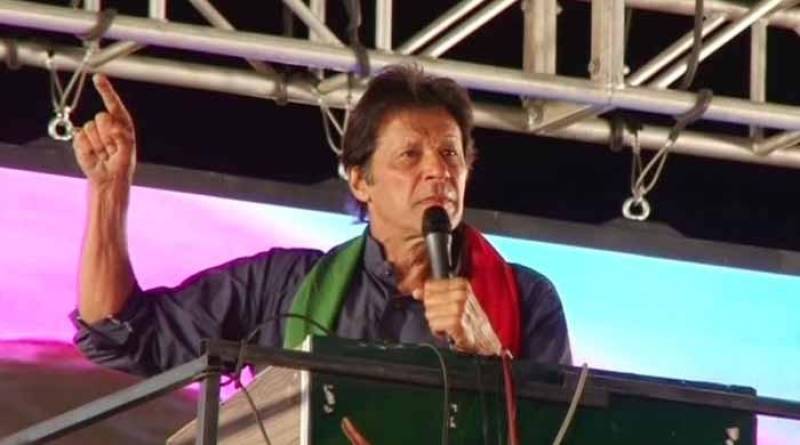 ISLAMABAD -  Pakistan Tehreek-e-Insaf Chairman Imran Khan on Friday said that he will disclose every detail about the bribe offer in the court, adding he would not publicise the name of the individual before any legal proceedings are initiated to investigate the matter.

"Take me to court and I will reveal the identity of the individual," said the PTI leader, adding that the 'messenger' who brought the offer was also offered Rs2bn for convincing him.

"If I name the person, they will conspire against him," said Imran.

The party leader, who held first public rally since the announcement of the Panama case judgment, further said he 'gathers people not for himself but for the country'.

Khan said that if people had not taken to streets then everyone would have forgotten about the Panama scandal.

Imran said that Nawaz Sharif and Shehbaz Sharif’s children own billions of rupees.

“Nations are made on the basis of character, not lies,” said Imran, adding “all the five judges have said that Nawaz Sharif is a liar.”

Imran demanded a social boycott of Nawaz Sharif and urged all his followers to do the same after the Panama verdict.

"I assure you that we have reached a point when we will hold a sitting PM accountable for his corruption."

Imran said two judges said the prime minister was neither 'Sadiq' and 'Ameen' and the other three said more investigations need to be carried out.

"The Supreme Court also disregarded the letter by the Qatari prince and that was the answer to every question," and added that ministers who loot public money were distributing sweets while declaring victory.

While referring to Indian businessman and entrepreneur Sajjan Jindal unannounced visit and meeting with the PM Nawaz Sharif in Murree, Imran said "he won’t be able to save Nawaz".

“Nawaz sent out a message that he wants friendly ties but the army does not,” said Imran.

Imran Khan said he would raise voice for the rights of Kashmiris wherever he could, adding that Indian PM Narendra Modi is campaigning against Pakistan on every front.

AWP leader Sheikh Rasheed addressed the participants of the rally ahead of Imran’s speech.

“I am a friend of Imran Khan, he is the last hope,” said Rasheed.

He said that all the five judges of the Supreme Court rejected the Qatari letter in the Panama leaks case. He stated that two judges said that the PM is no longer Sadiq and Amin.

“How Pappu, who flunked two exams, has been declared pass?” said Rasheed.

Nation has hopes from Imran Khan, said the AWP leader.