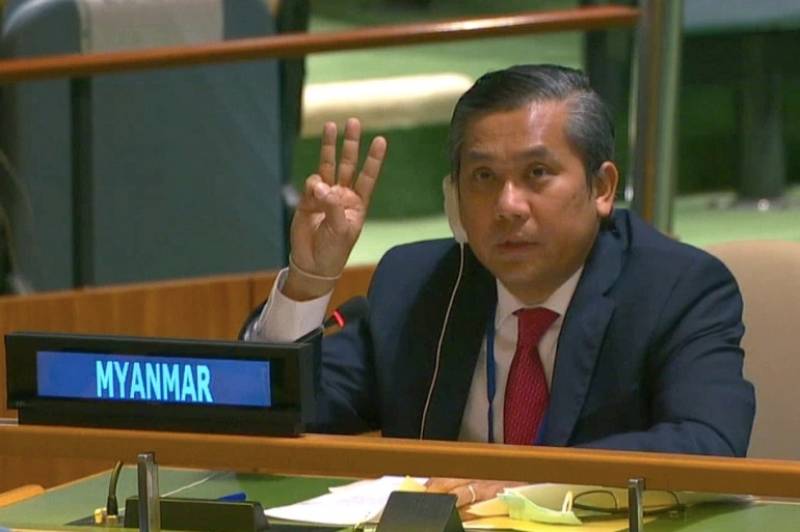 NAYPYITAW – Military rulers in Myanmar have fired the country's ambassador to the United Nations, a day after he called for help to remove the army from power.

State television announced his removal saying he had betrayed the country and spoken for an unofficial organisation which does not represent the country.

In a speech on Friday, Kyaw Moe Tun had called on the United Nations to use ‘any means necessary’ to halt the military coup.

His removal follows the bloodiest day of weeks of demonstrations against the military coup as police shot dead at least seven people and injured several others on Sunday.

As demonstrations against the military coup, ousting the democratically elected government of civilian leader Aung San Suu Kyi, enter their fourth week, security forces launched a violent crackdown on protesters in towns and cities across the country.

“If they attack us, we’ll defend. We’ll never kneel down to the military boots,” said Nyan Win Shein from one Yangon protest.

In the biggest city, Yangon, police opened fire on demonstrators and killed a protestor, according to Reuters, citing a hospital doctor. Local news channel Mizzima also reported the death in Yangon's Thingangyun township.

A woman died of suspected cardiac arrest after police broke up a teachers' protest with stun grenades, in Yangon, citing the woman's daughter and a colleague, reported Reuters.

As Myanmar military cracks down on protests, Thai protesters who complain of decades of military and royal domination in Thailand are also in the streets. #WhatsHappeningInThailand #MilkTeaAlliance #ม็อบ28กุมภา pic.twitter.com/3IAwO3nsCZ

In Dawei, south of the country, police shot three people and wounded more than a dozen when they opened fire on protestors, according to media outlet the Dawei Watch.

Rescue worker Pyae Zaw Hein said the trio were "shot dead with live rounds", while the injured were hit by rubber bullets.

Myanmar Now reported two people had also been killed in a protest in the second-largest city of Mandalay.

It was the most casualties in a single day.

ISLAMABAD – Pakistan has hoped that all parties in Myanmar will exercise restraint, uphold the rule of law, ...