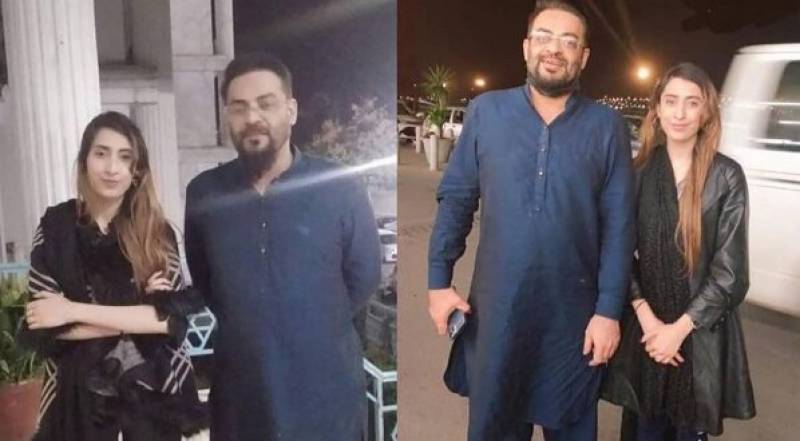 Haniya Khan, who claims to be the third wife of famed televangelist and PTI lawmaker Dr Aamir Liaquat Hussain, has threatened to leak the latter’s nude in a latest Facebook live session.

The threats from the model come after the Aalim Online host denied the claims of marrying her.

In the live session, Khan said she loved her Aamir since he was her husband. “I don’t want to mock him but I just want justice,” he added.

Hitting out at Aamir Liaquat’s second wife, Tuba, Haniya said that she would not easily give up like Bushra, the first wife of the TV personality, did.

She urged Hussain to accept her publicly, adding she was madly in love with him.

In another live session, Haniya Khan who appears to be added she would be left with no option but to share his nudes to prove her claims.

Earlier this week, Haniya Khan claimed that she was the 'third wife' of the televangelist. Hailing from Islamabad, she framed allegations on the TV host and his second wife Tuba Aamir in a video message shared on social media. Further, she accused Tuba Aamir had used ‘black magic’ against her.

Defending himself against the accusations, Dr Aamir Liaquat Hussain cleared the air about his third marriage allegations where he specifically states that Bharaas star Tuba Amir is his only wife despite what people think.

Further, he went on to say, "Everyone hates talkative women, but no one marries a deaf-mute woman, people speak a lot, like you all, and according to you people I am married twice, thrice and many times but my marriage is only with Tuba, she is my only wife.”

Moreover, the religious scholar also narrated a verse which meant he’s the one who only cries in front of Allah and has started studying himself and he also gave a message through verse.

There is no stopping Dr Aamir Liaquat Hussain from being the unprecedented king of ratings and scandals this Ramadan ...