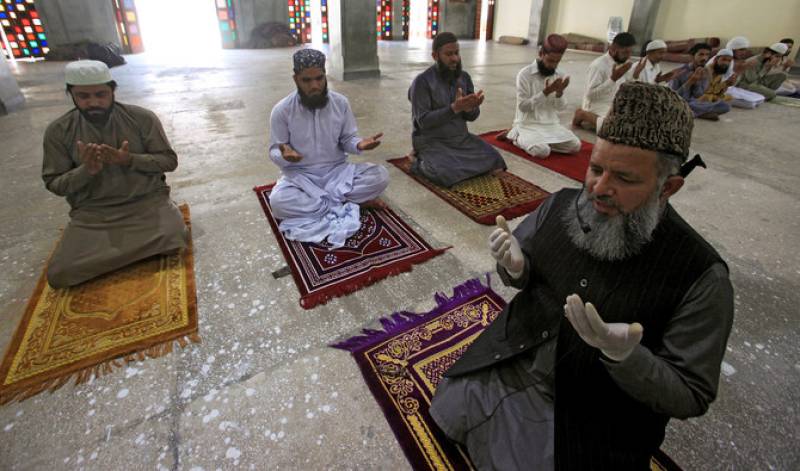 PESHAWAR – Prime Minister Imran Khan on Wednesday launched a stipend scheme for prayer leaders in Khyber Pakhtunkhwa by formally distributing checks during a ceremony in Peshawar.

Officials maintained the scheme was designed to address the financial requirements of religious leaders who usually lack any other source of income.

“We aim to make Pakistan an Islamic welfare state for which we have been striving for the last 25 years,” the prime minister told a gathering after distributing the checks.

Hours before arriving in Peshawar, Pakistan’s election regulatory body warned the premier against violating the election code of conduct since the province is scheduled to hold the local body polls in the coming days.

Speaking to Arab News, the provincial spokesperson Barrister Mohammad Ali Saif said the stipend scheme for religious leaders would benefit 6,000 prayer leaders, adding they would get Rs21,000 per month.

“The monthly honorarium will be a constant source of income for prayer leaders,” he explained. “The scheme has also been launched to implement the prime minister’s vision of Pakistan as an Islamic welfare state.”

The chairman of Pakistan’s moonsighting committee said the stipend scheme to facilitate prayer leaders was a commendable initiative which should also be replicated in other provinces.

“I really appreciate this step because it will create greater harmony in society,” Maulana Abdul Khabeer Azad told Arab News. “It will also provide huge financial support to prayer leaders.”

He said the government had allocated Rs120 billion to help families who earned less than Rs50,000 per month, adding they would get 30 percent discount on daily use commodities such as ghee and pulses under the initiative.

He directed the lawmakers and ministers to visit their constituencies and convince the public to register themselves to avail the offer.

He informed that governments in Balochistan and Gilgit-Baltistan would soon launch health insurance cards to help poor segments of society.

In addition to that, he said his government had launched the biggest scholarship program by allocating Rs47 billion to benefit 6.3 million students.

COLOMBO – Sri Lankan man Priyantha Kumara, who was lynched by a mob in Sialkot for alleged blasphemy, was buried ...