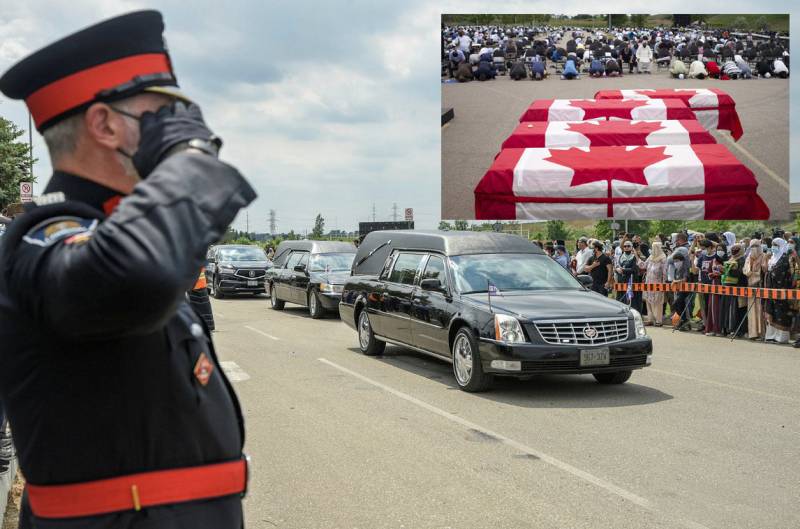 OTTAWA – The four members of a Pakistani family who were killed last week in a hate-fuelled attack in Canada’s Ontario were laid to rest Saturday as their deaths continued to spark calls for action to end Islamophobia.

The funeral for Salman Afzaal, 46, his wife Madiha, 44, their daughter Yumna, 15 and Salman´s mother Talat, 74, were held at the London Islamic Center while a public homage ceremony was also held at a nearby football field.

The burial held in a private ceremony, family’s four caskets can be seen covered with a Canadian flag.

People had lined up along the route of the funeral cortege in solidarity with the victims of the terror attack, which has badly shaken the world.

During the funeral, the participants wore green ribbons, to denounce Islamophobia – it was also the favorite color of young Yumna. Government leaders, the mayor of London, Pakistan’s High Commissioner, and a large number of people attended the homage ceremony and delivered addresses.

Pakistan’s ambassador to Canada, Raza Bashir Tarar, while addressing the crowd said ‘the very fact that their coffins are draped in the beautiful Canadian flag is a testimony of the fact that the entire Canadian nation stands with them’.

Meanwhile, the ceremony, with brief remarks and prayers, was broadcast live on major Canadian networks. A number of vigils and solemn commemorations have taken place across the North American country in recent days.

ISLAMABAD – Prime Minister Imran Khan on Saturday called upon the world leaders to launch a crackdown on online ...

Earlier, Afzaal, his wife, their teenage daughter, and his mother were out for a walk in their neighborhood when a 20-year-old truck driver drove into them on purpose, according to authorities. A fifth family member, a nine-year-old boy, was seriously injured but is recovering.