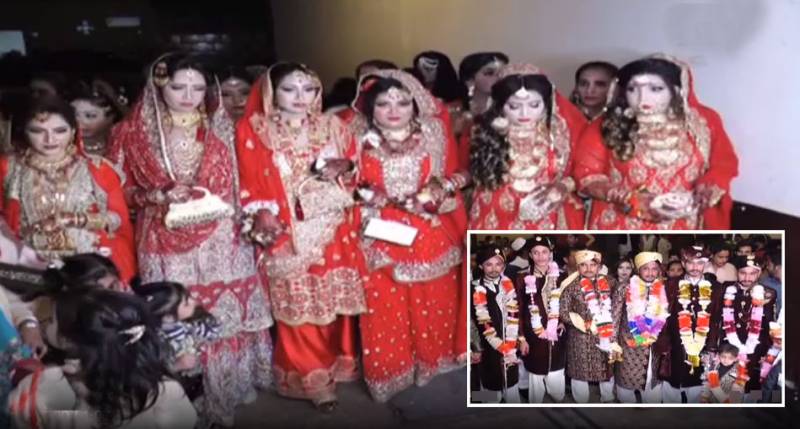 LAHORE – Six brothers from the country’s seventh-largest city wed six sisters in a unique wedding as the grooms and brides are cousins.

The tradition of mass weddings is common in the South Asian country but one such mass marriage ceremony has become the talk of the town where six sisters of a family got hitched with six brothers of another household in Multan.

Reports in local media said Mohammed Lateef’s six daughters tied the knot with their six cousins in a grand wedding event. One of the bridegrooms stated it was a ‘love marriage’.

On the other side, one of the six brides, while expressing her emotions on her big day said, all six sisters are ‘happy’ about getting married on the same day.

The unique wedding also witnessed the groom’s bhangra [a type of traditional folk dance] outside the wedding hall.

Meanwhile, the father of the grooms said they have always held grand multiple wedding events and accepted whatever came from the family elders. He also mentioned that such events reduce the financial burden on families.

Weddings in Pakistan are all about lavish décor and scrumptious food. As the extravagance goes top-notch ...

The development is rare in the world but is common in parts of the South Asian country as earlier five brothers from Okara wed five sisters from Kahror Paka.

With a storyline similar to a Bollywood movie, a man crashed into the wedding of his ex-girlfriend and forcibly ...