Sixth death anniversary: A peek into 'defiant' human side of MM Alam 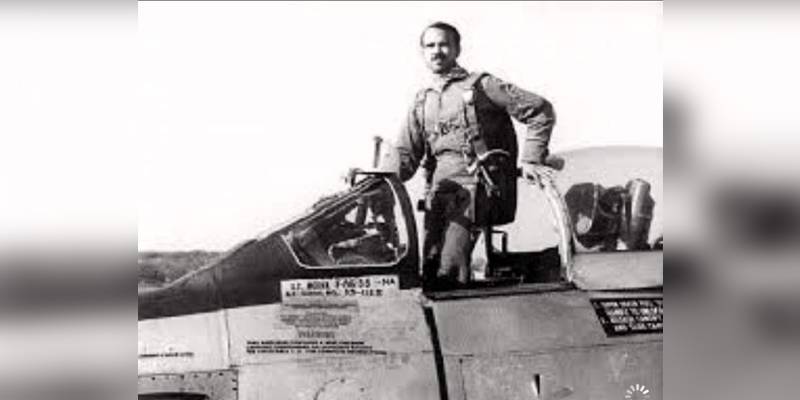 LAHORE - The sixth death anniversary of the 1965 war hero Muhammad Mahmood Alam, popularly known as MM Alam is being observed across Pakistan with fighter pilots lavishing praise on their former colleague for setting the bar way too high.

MM Alam shot to fame for his remarkable show of brilliance in the 1965 Pak-India war when he was posted at Sargodha and during the war, he was engaged in various dogfights while flying his F-86 Sabre fighter.

He earned massive praise after he shot down nine IndianHawker Hunter fighters in the aerial fighting and damaged two others. In one mission on 7 September 1965, Alam crashed down five Indian aircraft in less than a minute, the last four within 30 seconds, establishing a world record, with a total of nine aircraft downed in the war.

MM Alam - The Man Who Lives On after Death

The post-retirement phase of MM Alam is interesting as the pilot remained secluded to his house often reading books and newspapers, without turning up at social events.

The bachelor sported a beard, wore shalwar-kameez, Chitrali cap and Kohati chappal, for the rest of his life in stark contrast to his seniors who preferred western (or modern) attire with well-stitched suits and neckties to carry.

During his tours to Islamabad, he used to stay with his elder most sister Noushaba who was an educationist- instead of a guesthouse lodging.

The aviation expert, who sent shock waves across India during the 1965 war,  required much less to live and much more to give as he ate very little and wore simple as described earlier.

He was generous even during the long period without pension money and often gave away his belongings to needy people around.

In the post-1965- era, he was more engaged in battles on the ground and preferred safeguarding the country even if it meant switching off extra appliances and air conditioners - though his ex-subordinates say he worked till late night.

The pilot was not a 'yesman' even before his Air Chief Anwar Shamim and at times also defied accepted norms of compliance. One such example of such defiance is his suggestion to Gen. Zia-ul-Haq during the briefing given by Air Chief Marshal Anwar Shamim on different options and choice of aircraft.

MM Alam says he got up at the end of the briefing and opposed his own Chief and asserted that F-16s were necessary for Pakistan.

“Sir, we should go for nothing less than F-16s which would serve our needs for the next 20-30 years,” MM Alam told Zia who left the briefing.

The response to Alam was that he had not done his homework properly.

Alam wrote to Gen. Zia and elaborated how the air force was being run at the time in a kind of charge sheet against his Chief. He also highlighted as to how his career was cut short through denial of base command, but no receipt of reply ever came prompting Alam to refuse the pension.

Gen. Zia also offered Alam a prize posting in the form of diplomatic posting to Australia or chair of the Institute of Strategic Studies, but Alam stood his ground on the retirement issue and rejected the lucrative offers; Gen. Zia-ul-Haq had been sufficiently ‘poisoned’ against blunt Alam to let him be retired.

Alam relocated to Islamabad and gave some insights into security and modern warfare during his lectures at Quaid-i-Azam University and other institutions and he was not merely a patriotic soldier but a scholar and intellectual who welcomed rational discussion.

Unlike other armchair analysts, he desired going inside Afghanistan, participate and experience the war and therefore accompanied Hizb-e-Islami for his trip deep across the war-battered area to participate in a major Mujahideen attack on Bagram airbase.

He was 50 when he had the courage to embark on such horrifying journey along with battle-hardened Mujahideen less than half his age bt he undertook strenuous walking on Margalla tracks and built the stamina needed for the mission.

Gulbadin Hikmatyar greeted Alam and presented him with a Russian pistol for his personal defence following which he drove to Parachinar to join his group for the long onward journey across snow-clad mountains.

Evading landmines, fending off ground fire and helicopter gunship attacks, they had to cross three other provinces to get near Bagram airbase and Alam remained in high spirits and physically fit.

Halfway down, Alam lost his balance and slipped on icy rocks which badly fractured his left arm besides external injuries and stopped his journey as he needed proper hospital care; he had to be relocated to Peshawar but his cut-short journey allowed him to comprehend the dynamic of the ongoing war and convincing him that the Soviets were destined to fail despite massive airpower.

Alam later landed in Panjsher towards the end of the Soviet occupation and spent eleven months in the Hindukush. He also stayed as a guest of Ahmad Shah Masood who called on Alam off and on, referring to him as General.

In Panjsher, he led a life of humility and simplicity but was a bit disoriented on return to Islamabad as per an educationist Raja Ehsan Aziz.

He had made up his mind to leave for Afghanistan, in the midst of post-Najib civil war but was not able to execute his plan.

While staying at the ATW Mess, he offered his services in any capacity needed and formally interacted with serving officers as well.

He later shifted to an exclusive two-bedroom guesthouse in the middle of the ATW Mess lawn which was inaugurated by Air Cdr (retired) M. M. Alam himself in 2002 and lived here until around 2005-2006, when ‘advised’ to temporarily shift to Faisal airbase Karachi.

Karachi remained as the host for Alam's family for much of their time and his younger brother Dr. Zobair Alam attended him during his repeated hospitalization in the last 18 months.

Air Chiefs starting with Air Chief Marshal Hakimullah and his successors including Air Chief Tahir Rafique Butt maintained good ties with the war veteran in contrast to his relationship with Air Chief Shamim and Gen. Zia-ul-Haq.