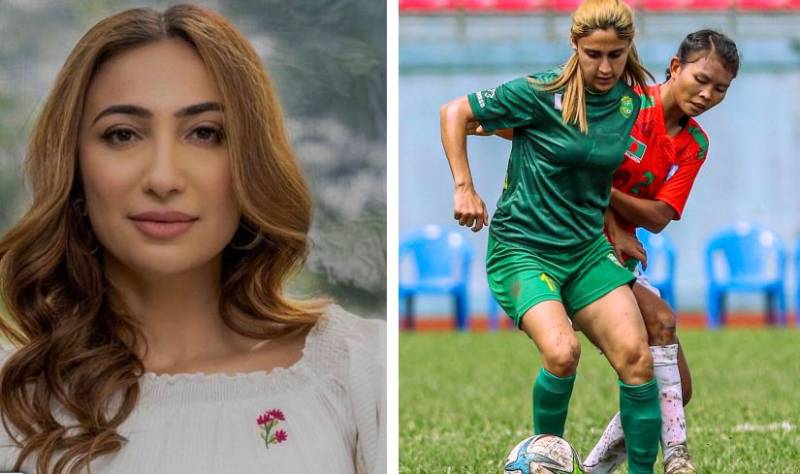 ISLAMABAD – A sports correspondent landed himself in hot waters as he objected to the national women's football team players wearing shorts during the South Asian Football Federation (SAFF) Women’s Championship 2022.

It comes after women in green finally claimed their first victory in international football in eight long years by outclassing Maldives 7-0 in their farewell game.

Despite appreciating the squad, the correspondent preferred to focus on the players' attires rather than performance.

In one of the viral clips from the post-match presser, the reporter can be heard asking why are girls wearing shorts, not leggings as they hailed from the Islamic Republic of Pakistan which is an Islamic country.

The coach of the Team Green responded that Pakistan holds its social and religious values very close, but in sports, one has to be progressive. As the management responded calmly, the cliched question of the journalist irked several social activists including Anoushay Ashraf who took to social media to respond.

The former VJ came down hard on the correspondent for focusing on the players' clothes and not their achievements.

Anuoshay called for a ban on journalist, saying he should know that Pakistan became an “Islamic” republic much after Jinnah’s death. “This country was made for oppressed Muslims, and not in the name of Islam to suppress Muslims of their choices.

She slammed the reporter for imposing religious values on other people, saying that asking sexist and misogynistic questions isn’t actually a part of his job.

“The girls choose [what to wear], and we’ve all been exposed to religion as much as anyone else and make informed choices. But as a man him worrying about their ‘nikker’ is cringe worthy. A true definition is a person who doesn’t judge but only leads by example,” her Instagram post reads.

KARACHI – Pakistan women’s football team overwhelmed Maldives to set up a crushing 7-0 victory on Monday in ...

Earlier, Pakistan women’s football team garnered praise after registering their biggest ever win in their last match of the SAFF Women’s Cup. Pakistan was earlier defeated by Bangladesh and India which restricted them from progressing to the semi-final.