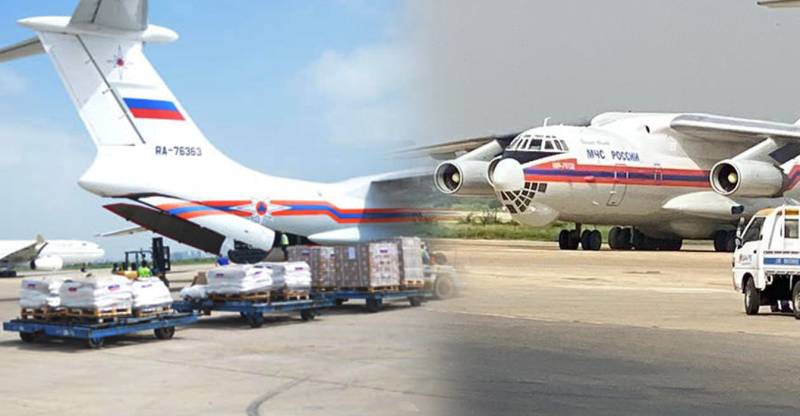 KARACHI – The first humanitarian assistance flight for the flood-affected people of Pakistan has arrived from Russia.

The flight was received by Russian Consul General in Karachi Fedorov Andrey, Advisor to Chief Minister on Relief and Rehabilitation Rasool Bux Chandio, and representatives of NDMA and the Ministry of Foreign Affairs.

The aid flight with key source of supplies arrived at the Jinnah International Airport, Karachi as unprecedented floods have left thousands homeless and killed nearly 1,500 people in the South Asian nation since mid-June.

Pakistan has received more than a hundred flood relief assistance flights; with 55 of them from the United Arab Emirates.

Foreign countries joined Pakistan's floods response as the death toll from the massive deluge soared above 1,500 while millions of houses have been damaged and hundreds of thousands completely destroyed after record rains that wreak havoc across the country.

The worst monsoon in nearly a decade also washed away in Pakistan which is already grappling with political and economic turmoil.

Over 33 million have been affected by the raging floods, causing a staggering loss of around $30 billion in damages to an already weakened infrastructure. The deluges also posed a serious threat to food security.

Besides all the troubles, hundreds of thousands of displaced people are also dealing with outbreaks of waterborne, skin diseases, with medical experts warning of a higher number of deaths from diseases.

NEW YORK – France has pledged to host an international conference with a focus on highlighting the need for ...