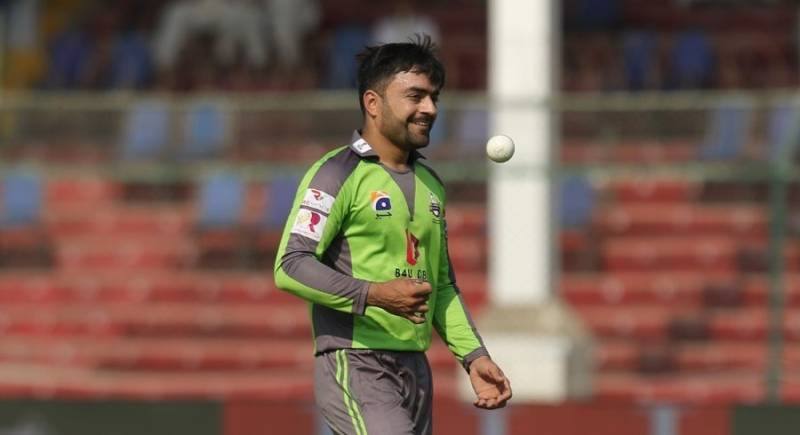 LAHORE – Afghan vice-captain and legspinner Rashid Khan has rejoined the Lahore Qalandars in Abu Dhabi for the remainder of the Pakistan Super League matches.

Rashid earlier represented Lahore in two of games which had won by Qalandars, but then he called up to play against Zimbabwe.

A statement issued on the Qalandar's official handle stated 'Pleased to announce Rashid Khan rejoins the Qalandars family! He will be playing all the remaining matches of PSL'

Pleased to announce @rashidkhan_19 rejoins the Qalandars family! He will be playing all the remaining matches of #HBLPSL

The availability of Rashid, who is very much in demand in leagues around the world and had impressed everyone with his leg-spin bowling, to the squad will help the Qalandars in many ways.

Khan’s statement issued by his franchise stated ‘I am excited to be back with PSL and Lahore Qalandars. I had a couple of good games with them earlier and the team went off to a good start. I am hopeful to help them continue with the momentum’.

Meanwhile, Lahore Qalandars also aimed high in the coming games with the addition of the finest legspinner as Bangladeshi all-rounder Shakib Al Hassan will not be able to join the franchise for the remainder.

Franchise senior official while speaking with a news channel expressed his delight over the Afghan cricketer. ‘This is great news for not only the fans of Lahore Qalandars but also for the fans of PSL. Rashid is one of the best T20 cricketers in the world and his presence will strengthen the Qalandars’ side. We are also thankful to the management of PSL who worked hard with us to ensure Rashid’s availability for PSL and Lahore Qalandars’, the Franchise COO Sameen Rana said.

DUBAI – The remaining Pakistan Super League 6 matches are set to stage in Abu Dhabi as the Pakistan Cricket Board ...

Earlier in March, the Pakistan Cricket Board (PCB) postponed the remainder of its premier T20 event, the Pakistan Super League season six, as Covid-19 cases were detected in a number of players.

The remaining matches of the sixth edition of the Pakistan Super League (PSL6) have been postponed for an indefinite ...