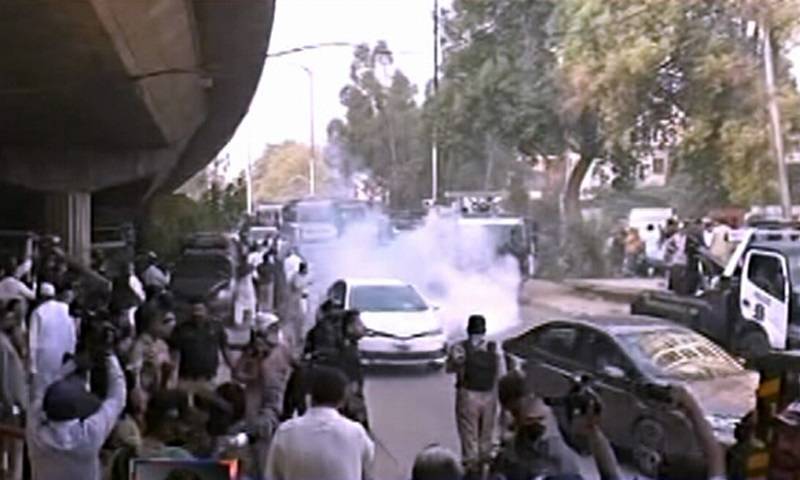 KARACHI – Police and paramilitary troops on Thursday baton-charged people protesting on a main artery of the city against the demolition of Nasla Tower on the orders of the Supreme Court.

Earlier in the day, Chief Justice of Pakistan Gulzar Ahmed directed Karachi Commissioner Iqbal Memon to ensure the Nasla Tower building is razed to the ground within a week. He remarked that the land allocated for a service road was encroached for the building.

The Association of Builders and Developers of Pakistan (Abad) staged the protest, disrupting traffic flow on Shahrah-i-Faisal near Nursery roundabout.

Later, police and Rangers reached the site to control the situation when the baton-charged the protesters and also fired tear gas to disperse them.

Traffic on the road that links the city with the airport and the national highway has now been restored while security officials are present around the Nasla Tower.

A representative of the builders’ association said that the building had been constructed after getting approvals from the authorities concerned.

Earlier this week, CJP Gulzar Ahmed on Wednesday scolded Karachi commissioner after submission of the demolition report, and ordered to raze the building immediately.

A bench headed by CJP Gulzar Ahmed heard of the case of a building declared to have been built on encroached land along with the Shahrae Faisal. During the hearing, the court reprimanded the Karachi commissioner and asked him to leave his post if he is unable to perform.

“We will send you straight to the jail,” CJP said while showing resentment over the report. After being criticized by the country’s top judge, commissioner Karachi apologized to the larger.

Later, the court ordered the commissioner to take all the available machinery and start demolishing the Nasla Tower.

ISLAMABAD – The Supreme Court Monday directed to demolish illegally-constructed Nasla Tower in a week and ordered ...