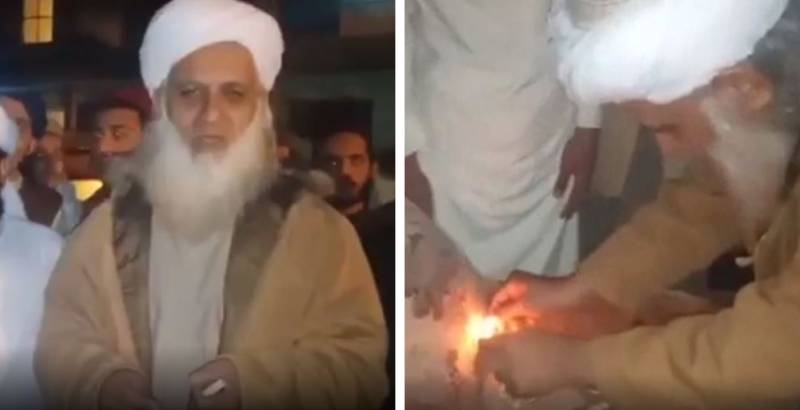 ISLAMABAD – The khateeb of Lal Masjid or Red Mosque in Pakistan’s capital says that it is “forbidden to use sofa in Islam.”

“The Holy Prophet (PBUH) and his companions used to sit on the ground throughout their graceful lives. They (the companions of the Holy Prophet) were mujahids (fighters) and we have no place for those who love a life of comfort,” says the 61-year-old cleric, before setting a sofa set on fire at his seminary in the heart of Islamabad.

In a short video circulating on social media, Aziz says he was hurt over the use of sofa inside the seminary and it was for his pupils' training for becoming the mujahid – a tough life for making a tough fighter.

“Mehnat kero (get used to hard work),” he advises his disciples – while the obedient ones help Abdul Aziz light fire to a plastic wrapper placed on the fabric sofa, one jokes about sparing the ‘life’ of the ‘poor’ sofa set. “Muaf ker den issey!”

Aziz then use a knife to cut the fabric so that the fancy furniture no longer remains of any use.

Last year, Maulana Abdul Aziz and his supporters had laid a siege at the Lal Masjid for almost four months that ended in a deal with the government for re-allotment of a sizeable piece of land for Jamia Hafsa, a seminary run by the cleric’s wife.

In 2019, the Supreme Court of Pakistan had cancelled the Capital administration’s allotment of a 20 kanal piece of land to Jamia Hafsa in H-11. When the administration started evacuating the building Aziz and his followers forced their way to Lal Masjid in February 2020. He returned to the mosque and tried to take over from where he was deposed by the Musharraf government during the siege of Lal Masjid which lasted from July 3 to July 11, 2007.

"May I smoke a cigarette?" Gen Kiyani's response when asked whether army should raid Lal Masjid or not

At least 103 people were killed in the bloody 10-day siege that shook the country and even troubled a powerful military rule. Among the dead was Aziz’s firebrand brother, Abdul Rashid Ghazi, his mother and son. Both the brothers had publicly supported Tehreek-i-Taliban Pakistan (TTP), a terrorist outfit that has been involved in attacking public places and killing thousands of people including women and children across the country.

After the crackdown, Aziz was caught trying to escape disguised as a woman. He faced two dozen indictments, including incitement to hatred, murder and kidnapping; but was released on bail in 2009.