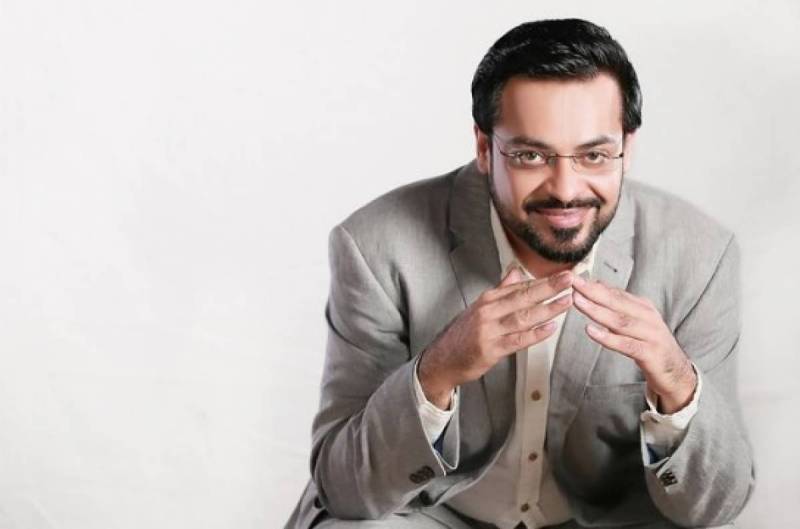 Aamir Liaquat Hussain was a versatile and multifaceted individual who shone like a glistering star on politics and showbiz arena by all means.

He was a distinguished Pakistani political figure, religious personality, poet and anchor person who dominated over his contemporaries. His life span comprises upon unending and relentless struggle competing as the most promising figure in journalism and surge for power corridors by dint of his oratory and intellectual depths.

After appearing into limelight, he became the pulse-beat of the masses with his bold and blunt stances over various national and international ongoing topics. During his two decades artistic and political journey, he established himself as a dynamic and matchless statesman and vocal  who used to think out of box as compared to his notable showbiz stars and seasoned politicians. It is true to say that late Aamir Liquat Hussain remained in the news with his professional excellence and somewhat controversies and contractions till his death.

Glancing at his beginning, Aamir Liaquat was born on July 5, 1971 in Karachi. His father Sheikh Liaquat Hussain was who was a Member of the National Assembly of Pakistan from 1997 to 1999. He won a seat in 1997 subsequently having joined the Muttahida Qaumi Movement in 1994.

Apart from his glories and distinctions, Aamir Liaquat Hussain was a RJ on FM 101. For many years, he has also hosted Ramadan transmissions, including Suhur and Iftar. He began his TV profession from PTV and was terminated right away owing to his incapability. It was the shortest span where he could not prove his mettle. He never seemed affected inversely with this initial ignominy and kept his journey as anchor. Later, he started as an anchorperson and after that as a host he had his first program on Geo Television Network and remained attached with this Group for over eight years.

After Geo’s services, he joined ARY Digital Network as Managing Director of QTV and as Executive Director of ARY Digital in 2010. This is the platform where he began his new program “Aalim Aur Aalam” on ARY Network. Additionally, Ramadan special shows for Sahoor and Iftaar were the brainwave of Aamir Liaquat Hussain’s artistic genius in Pakistan Electronic Media.

His glorious anchoring touched its pinnacle, he took an exclusively new set-up and arrangement, and was named "Rahman Ramadan" in the year 2011. Despite his unprecedented fame and popularity, he announced to declare that he is parting ARY Digital Network on 21st June 2011.

The upheavals in professional life continues when Aamir Liaquat returned Geo TV Network in June 2012. In January 2014, he began hosting a live game show ‘Inaam Ghar’ on GEO Entertainment. On June 20, 2014, he left GEO and joined Express Media Group as president and Group Editor of Daily Express. In Ramadan, he was facilitating the live religious TV program Pakistan Ramazan and Alim On air on Express Entertainment. After Ramadan transmission, he rejoined Geo, and at that time, he hosted a morning show "Subh-e-Pakistan".

He then joined BOL media group in 2016, and started hosting current affairs talk show "Aisay Nahi Chalay Ga". There, he hosted "Ramazan Mein BOL" in 2017, during which he also started hosting a game show; "Game Show Aisay Chalay Ga". He left BOL in November 2017. Within a lapse of two years, he joined Pakistan Television Corporation in 2019. He was also offered to appear in specific movies on Kashmir Issues and Burhan Wani Shaheed in his career. In April 2020, he started hosting a game show called "Jeeway Pakistan" which airs on Express TV. Precisely, Aamir Liaquat Hussain worked in Pakistan’s leading TV channels and anchored highly rated programs but remained banned for a while for his bluntness and rashness.

Being an individual of political vibrancy, he spent a very dynamic and proactive life. In 2005, he was assaulted by maddened young people amid his visit to Jamia Binoria during his attempt to rescue girls. As the Minister of Religious Affairs, he also asked religious researchers from Pakistan to give a Fatwā in regards to suicide violence in May 2005. Statistically, fifty-eight religious researchers issued a declaration against suicide bombings and created an affluent effect in that era. 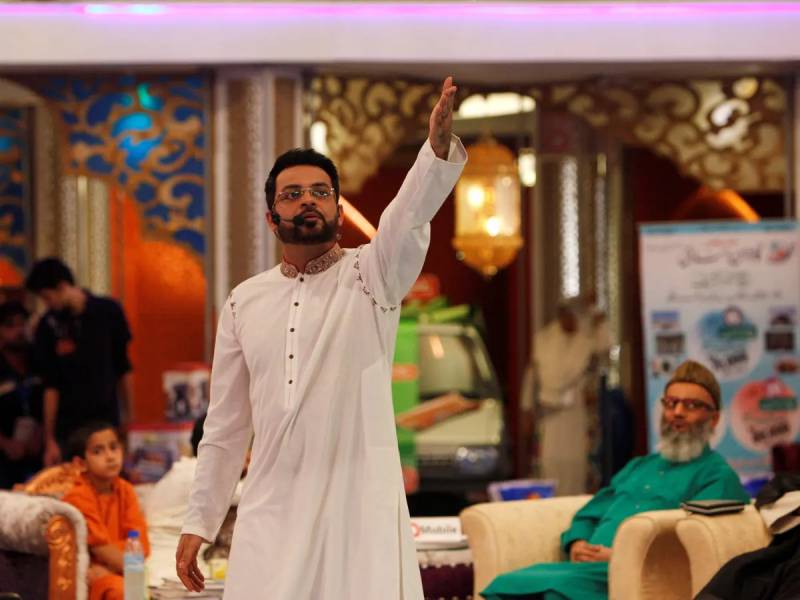 His political journey started in 2002 when Aamir Hussain was elected to the National Assembly of Pakistan for the first time in 2002 on the ticket of the Muttahida Qaumi Movement from NA-249 (Karachi-XI) seat. He was appointed as the Minister of State for Religious Affairs, Zakat, and Ushr Division in the Shaukat Aziz government in September 2004.

Aamir Liquat Hussain served as the Minister of Religious Affairs till 4 July 2007 but was informally expelled from the party over Salman Rushdi Statements issue. Later, he was publically ejected from Muttahida Qaumi Movement for mistreating the party policy to progress his plan even if it disputed with the party’s values.

He was also rated twice among the most influential 500 Mulims conducted by The Royal Islamic Strategic Studies Center in Amman, Jordan. Apart this distinction, a Pakistani book, 100 Pakistanis: The Famous and Influential by Universal Oxford Publications has likewise included Aamir Liaquat Hussain and his factual conversation in the book.

On the contrary to landmark achievements, he remained in limelight news during Fake Degree case when the University of Karachi and even HEC proclaimed his degree not known. He also became notorious for allegations of provoking against Ahmedis during September 2008. Adding, he became notorious and defamed after his work station video tape exposing his real character and caliber in August 2011. In 2016, Aamir Liaquat Hussain was among the party leaders who were arrested by Sindh Rangers following an anti-Pakistan speech by MQM supremo Altaf Hussain.

The controversies seem never ending for Aamir Liaquat Hussian. Just after elapsing some months, in January 2017, lawyer and human rights activist Jibran Nasir filed an FIR against TV anchor Aamir Liaquat Hussain and BOL TV network under the Anti-Terrorism Act for intimidating the public and spreading religious hatred. In TV Programs, he had accused him of being an atheist, a traitor who is an Indian Agent and is working against Pakistan and Pakistan Army, a blasphemer who insults and runs propaganda against Allah, the Holy Quran and the Holy Prophet (S.A.W).He levelled similar allegations against Salman Haider, Ahmed Wacias Goraya, Asim Saeed and Ahmed Raza Naseer. He also claimed that Om Puri was murdered. Following which the PEMRA banned Hussain and his programme Aisay Nahi Chalay Ga on BOL News for preaching hate.

The most dismantling and embarrassing controversy was Nagin’s dance in a live show. Television host and politician Dr Aamir Liaquat Hussain’s Nagin dance video was not well-received by the netizens, with majority of social media users slamming him for his bizarre acts. Later, he responded confidently that: “I do all things intentionally and not mistakenly, just to bring smile on faces of people in the difficult times. He also made his way to the limelight as he hilariously grooved to “Nagin” song on his show “Jeeway Pakistan”.

Sharing about his affiliation with PTI, Aamir Liquat Hussain became a member of the Pakistan Tehreek-e-Insaf (PTI) in March 2018. In the 2018 Pakistani general election, he was re-elected to the National Assembly as a PTI candidate from NA-245 (Karachi East-IV) Constituency.

Commenting on matrimonial background, Aamir Liquat Hussian married thrice but remained in distress. He got two children -- son Ahmed and daughter Dua -- from first wife Syeda Bushra Iqbal whom he divorced in December 2021.

Amir Liaquat announced his second wedding with Syeda Tuba Anwar -- who was working in Bol TV as corporate manager -- when he filed his nomination papers for elections in June 2018. This marriage lasted for around three years, and in February 2022, Tuba filed for divorce (khula) from Aamir after months-long separation.

Lamentably, his third and the youngest wife Dania Malik a.k.a. Dania Shah turned to be lethal for his life. He passed away on 9th June, 2022 mysteriously. It is generally believed that his final days were marred with scandals, divorces, and controversies which not only took a toll on his mental health but tarnished his public image and credibility. 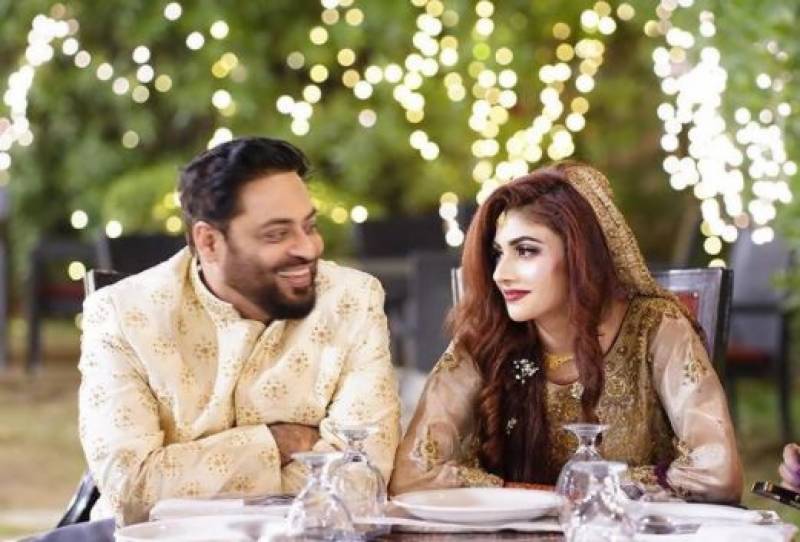 Most recently, the FIA arrested late Dr. Aamir Liaquat’s third wife, Dania Shah, from Lodhran, Punjab, a judicial magistrate in Sindh sent her to jail on judicial remand in the leaked video case registered against her. Significantly, Dua Aamir, daughter of the late TV anchor, had filed an FIR against Dania Shah under Sections 20 (malicious code), 21 (cyber stalking), and 24 (legal recognition of offenses committed in relation to information system) of the Prevention of Electronic Crimes Act, 2016.

Apart from these judicial developments, Aamir Liaquat Hussain has left this transitory world contributing splendidly for upcoming generation to explore and establish their identities in showbiz industry.