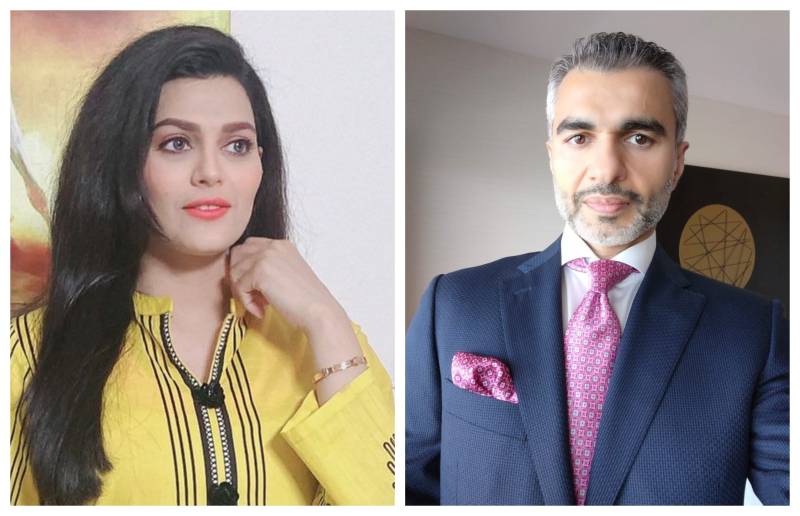 LAHORE/DUBAI – Actress and model Sophia Mirza confessed that she conspired to steal around half a million Dirhams cash and jewellery and watches worth millions of Dhirems from her former husband Umar Farooq Zahoor’s Dubai apartment through a staged robbery and stabbed him when the plan failed to materialise, according to a legal paper.

Sophia Mirza (whose real name is Khushbakhat Mirza) also confessed in the same legal paper that she stabbed Umar Farooq Zahoor at the couple’s Dubai apartment with the intention to kill him over domestic issues.

Sophia Mirza, 44, and Umar Farooq Zahoor married in 2006 and divorced a year later in 2007 after the birth of twin daughters Zainab and Zuneirah, who are 15 now. They lived in a posh area of Dubai’s Emaar Tower before their divorce.

In a legal paper, Sophia Mirza undertook the full responsibility of conspiracy with help from a Pakistani national air-hostess, who worked for the Emirates at the time, and the house maid to rob her former husband of his belongings including cash, jewellery and other expensive items.

The legal paper confirms Sophia Mirza as saying in an undertaking: “I conspired to steal from my husband's safe at his residence in Dubai in Emaar Tower number 2, Apartment 405. In this conspiracy my maid "Razzia" was involved along with a close friend of mine Ms Nasrin who is an air hostess in Emirates airline.

Sophia Mirza, 42, who has been appearing in Pakistani dramas and comedy shows, accepted that she planned to “steal all the valuable belongings of my husband Umar Farooq Zahhor along with some 400.000 Dhirems cash which was kept in his safe”.

Sophia Mirza’s initial plan was to steal Umar Zahoor’s cash and jewellery from his safe and hand it over to their maid on the 25th of July 2006. She conspired with the maid to take belongings in a bag and sneakily “leave through the garage so no one would be suspicious. Outside my Friend Nasrin (Emirates Airline air hostess) was waiting in a white car along with another guy”.

Sophia Mirza explained in the legal paper that she had to change her plan in order to avoid suspicion coming to her. She said she “decided to leave with all my husband’s belongings but later agreed that it would wake up too much attention towards me that I did the theft”.

Sophia Mirza dropped the plan and came up with the robbery plan, for a gang from Pakistan to fly into Dubai and rob Zahoor’s flat and then flee the country.

She said: “We planned out that we should make it look like a robbery so I wouldn’t be accused of the same. The plan was that we were going to ask someone to fly in from Pakistan and go to my home and use my keys to open the door and steal everything from the safe at a time when both me and my husband was out. I was going to provide the safe codes and the location of where the safe was located.”

Sophia Mirza revealed in the legal paper that she discussed her robbery plan with Dr. Asad, who at that time was working at a well-known hospital in Abu Dhabi. Dr Asad instantly informed Umar Farooq Zahoor about the robbery and assault plan and told him that the hitmen could assassinate him too if he resisted the robbery inside his flat.

Sophia Mirz said in her confessional statement: “Unfortunately, the plan of mine was disclosed to my husband by Dr. Asad. My intentions were to clean up the house and teach my husband a lesson because he didn’t give me money when I asked him. Moreover, I was afraid that my husband would find out and create trouble for me. I planned with my friends that I will fix him up in some legal trouble here in Emirates so that he couldn’t chase me back home in Pakistan.”

In the same legal paper, Sophia Mirza confirmed that she stabbed her husband when confronted her about the robbery and assault conspiracy.

Sophia Mirza confirmed: “I also undertake that I have assaulted my husband with a knife when her confronted me about this situation. I hereby undertake full legal responsibility of my action.”

According to details, Sophia Mirza attacked Umar Farooq Zahoor with a 12 inches knife when he confronted her about her plan to rob and assault him through professional robbers flown over from Pakistan. Sophia Mirz attempted to plunge a knife into Umar Farooq Zahoor’s heart but she was prevented when Umar Zahoor blocked the attempt and caught the knife. His thumb and a finger were severed during the assault.

Sophia Mirza was sent a copy of her confessional statement and asked to comment but she refused. A representative of Sophia Mirza said the document carried genuine signatures of Sophia Mirza. He confirmed that Sophia Mirza had made the confessional statement with her former husband in exchange for the deal that Umar Zahoor will not press the charges against her with the Dubai Police and that she will return to Pakistan without any prosecution in the UAE, which could have resulted a lengthy jail sentence.

Sophia Mirza and Umar Farooq Zahoor have been at loggerheads over the dispute of custody of their two daughters.

A major investigation this month revealed that Sophia Mirza conspired with Imran Khan’s Accountability and Interior Minister Shehzad Akbar to launch inquiries into him using the FIA. Shehzad Akbar tasked the FIA to issue red arrest warrants of Umar Zahoor to get him extradited from Dubai to Pakistan. The FIA sources have confirmed they were put under pressure to run false cases against Umar Zahoor.

After the story of FIA’s conspiracy with Sophia Mirza became public, daughters of Sophia and Umar Farooq said in TV interviews that they were living with their father in Dubai and didn’t wish to live with their mother and didn’t want to have anything to do with her case. They have accused their mother of staging media stunts for cheap publicity.