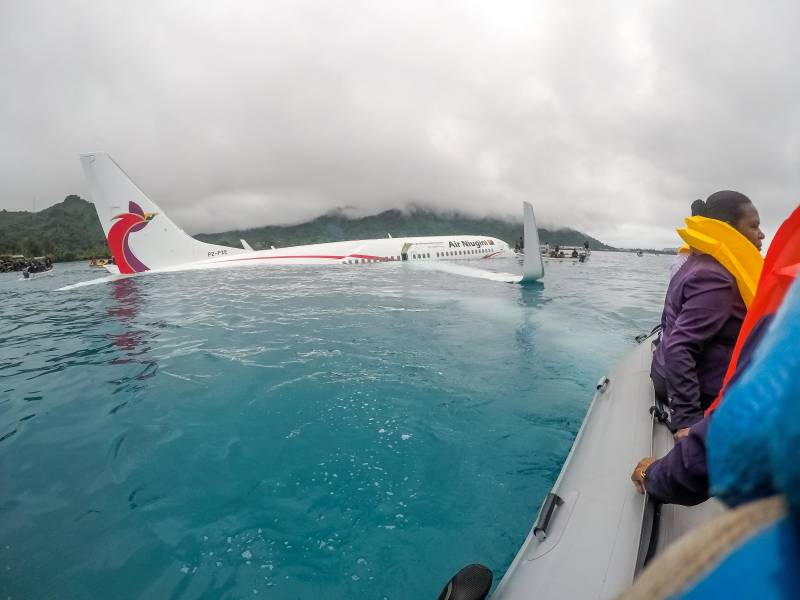 CHUUK - After months into investigations regarding the Air Niugini crash, it has emerged that the sole fatality in the accident at Chuuk was a passenger who was not wearing a seat-belt.

Air Niugini - the national airline of Papua New Guinea - had originally claimed that all 35 passengers and 12 crew members had evacuated the aircraft after the jet came down 1,500ft short of Chuuk's runway in September last year, however, subsequent information indicated that one passenger was missing.

PNG's Accident Investigation Commission (AIC) has now revealed that at the point when the Boeing 737-800 struck the surface of the sea, Eko Cahyanto Singgih was not wearing the seat belt.

On the day of the accident, US Navy divers informed a rescue co-ordination meeting that they had searched the aircraft "from front to back, and back to front, and that the cabin was clear", says the Papua New Guinea Accident Investigation Commission.

"The search parties, therefore, concentrated their search away from the aircraft," it adds.

However, three days of searching failed to locate the missing passenger seated at 23A, and the investigating commission requested a verification search of the 737.

Experienced Japanese divers, seconded by the government located the passenger between seat rows 22 and 23, in the vicinity of a fuselage fracture and Pathological analysis found that the passenger had succumbed to injuries within 3min of the impact.

An autopsy determined that there was a lack of trauma around the waist and hips, indicating that the passenger "was not wearing a seat-belt" at the time of the crash.

The Air safety investigators have also found that two Air Niugini pilots ignored as many as 13 alerts before their plane crashed into a lagoon in the Federated States of Micronesia.

In its final report, the committee stopped short of blaming the accident on pilot error, instead saying that "human factors" contributed.

"Both pilots were fixated on cues associated with control inputs for the landing approach," the report found.

"The investigation observed that the flight crew disregarded the EGPWS (Enhanced Ground Proximity Warning System) alerts, and did not acknowledge the "minimums" and "100-feet" advisories or respond to the EGPWS aural alerts; a symptom of fixation and channelised attention," AIC chief commissioner Hubert Namani said.