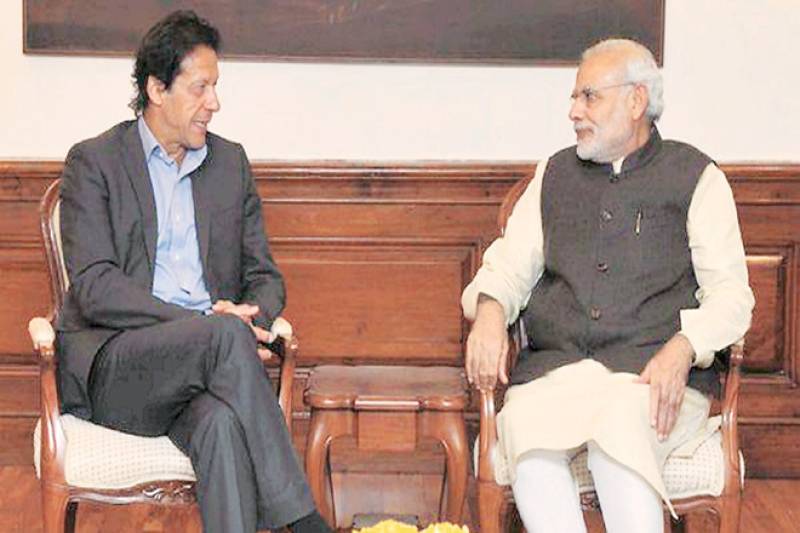 ISLAMABAD - Pakistan's Prime Minister Imran Khan said on Tuesday that there may be a better chance of peace talks with India if ruling Bharatiya Janata Party (BJP) wins the general election.

Talking to a small group of foreign journalists on Tuesday, the premier said if Congress assumes power in polls, it might be too scared to seek a settlement with Pakistan over Indian-occupied Kashmir, fearing a backlash from the right.

“Perhaps if the BJP — a right-wing party — wins, some kind of settlement in Kashmir could be reached,” Khan said and added that this was despite the massive alienation that Muslims in Kashmir and Muslims, in general, were facing in Modi's India.

“I never thought I would see what is happening in India right now. Muslim-ness is being attacked,” said the premier.

Imran Khan said Indian Muslims he knew, who many years ago had been happy about their situation, were now worried by extreme Hindu nationalism.

He said Modi, like Israeli Prime Minister Benjamin Netanyahu, was electioneering based on “fear and nationalist feeling”.

The prime minister said BJP's pledge to propose stripping decades-old special rights from the people of Jammu and Kashmir was a major concern, though it could also be electioneering.

Prime Minister Khan reiterated that Islamabad was determined to dismantle all militias in the country and that the government had the full backing of the military in this regard.

He said Kashmir was a political struggle and there was no military solution, adding that Kashmiris suffered if armed militants from Pakistan came across the border, leading to Indian army crackdowns.

NEW DELHI - India’s ruling Bharatiya Janata Party stated on Monday it would remove special rights for the people of ...

Khan said there was still the possibility of military action by India against Pakistan if the polls turn against Narendra Modi in the next few weeks.

The comments came almost a month after the South-Asian neighbours came to the brink of a full-blown war over the Pulwama attack in which over 40 Indian soldiers were left dead.

India had immediately hurled allegations of Pakistan's involvement, however, Islamabad categorically rejected the claim and asked for actionable evidence.

Pakistan and India also engaged in an aerial dogfight in the last week of February in which Pakistan shot down two Indian fighter jets and captured a pilot ABhinandan alive; he was set free as a gesture of peace by Pakistan.

Elections in India are set to begin this Thursday. The practice would continue till May 19th and the counting would start and end on May 23rd.