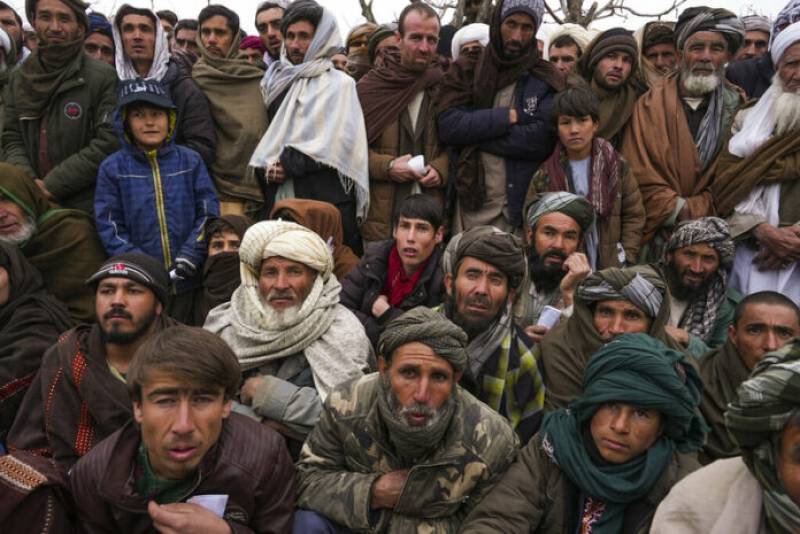 GENEVA — In a bid to avert a humanitarian crisis in the country ravaged by decades of war, the UN on Tuesday launched a funding appeal for more than $5 billion to provide life-saving aid to 28 million people inside Afghanistan and five neighbouring countries of refuge this year.

Afghans are just one step away from famine and the bulk of the funds, $4.4 billion, will be used to deliver vital relief aid for 22 million Afghans, or nearly half of the country’s population, facing acute hunger.

UN Emergency Relief Coordinator Martin Griffiths says the humanitarian appeal is the world’s largest ever, marking the enormity of the crisis in Afghanistan.

“Without intervention, nearly 4 million children under the age of 5 will be malnourished this year, over 1 million of them severely so. Our staff on the ground are witnessing this tragedy unfold every day and across the country,” Griffiths said. “It is a moment of profound consequence for the people of Afghanistan.”

Deputy administrator of the United States Agency for International Development, Isobel Coleman, while speaking at the event, announced $308 million in additional U.S. humanitarian assistance. It brings total U.S. relief aid for Afghanistan and for Afghan refugees in the region to nearly $782 million since last October.

U.N. aid agencies describe Afghanistan’s plight as one of the world’s rapidly growing humanitarian crises, with more than 9 million Afghans estimated to be internally displaced.

Millions of children are out of school, women’s and girls’ rights have continued to come under attack, farmers and herders are struggling amid the worst drought in decades, the economy is in free fall, and basic health services have collapsed, noted Tuesday’s appeal statement

Griffiths rejected concerns the funding would be used to support the interim Taliban government. He insisted the money would go directly into the pockets of “nurses and health officials in the field” so these services can continue, not as support for Afghan state structures.

The Taliban’s control of the country prompted the United States and other Western donors to immediately suspend most non-humanitarian funding to the aid-dependent South Asian nation and freeze about $9.5 billion worth of Afghan foreign cash reserves.

Aid groups say the punitive actions and long-running international sanctions on Taliban leaders have brought the national economy to the brink of collapse, worsening the humanitarian crisis in Afghanistan stemming from years of wars, natural disasters and poverty.

No country has recognized the Islamist group’s government in Kabul, making it difficult for countries to ensure an unhindered flow of relief aid, and hampering work of humanitarian operations on the ground.

Foreign governments are scrambling to work out how to engage the Taliban to scale up humanitarian aid and help in preventing an economic meltdown in the country, while avoiding formally recognizing the new government.

“The United States continues to urge the Taliban to allow unhindered humanitarian access, safe conditions for humanitarians, independent provision of assistance to all vulnerable people, and freedom of movement for aid workers of all genders,” the USAID’s Coleman said in a statement.

Aid agencies say Afghans are running out of money, while the price of food, medicine and other basic items has skyrocketed amid U.N. warnings Afghanistan could see near universal poverty by mid-2022, with 97% of Afghans impoverished.

“A full-blown humanitarian catastrophe looms. My message is urgent: don’t shut the door on the people of Afghanistan,” Griffiths said.

More than 6 million Afghan refugees have been living in neighboring countries, mostly Pakistan and Iran, for decades. Pakistani and Iranian officials say both countries have received hundreds of thousands of new refugees since the Taliban takeover of Afghanistan last August.

“The key issue here is to transform this massive internal displacement—probably the biggest in the world in terms of numbers—and prevent this from becoming a massive external displacement, which is a very major risk at this point,” Grandi warned.

He pressed the global community to do everything it can to prevent a disaster in Afghanistan. Grandi called for $623 million to support 5.7 million Afghans refugees and the communities hosting them in neighboring countries.